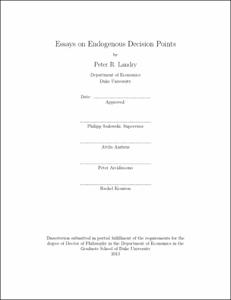 This dissertation explores the implications of endognenizing the times decisions are faced for intertemporal decision-making in a variety of contexts. Chapter 1 considers a standard, expected-utility maximizer whose preferences are inferred using standard protocols that influence the decisions that the agent considers. The treatment shows how these induced decision points," if unaccounted for, can produce illusions of well-known preference anomalies. Capturing the endowment effect, if receiving a good compels the agent to consider the decision to consume it, then the willingness-to-accept (WTA) in exchange for the received good exceeds the willingness-to-pay (WTP) prior to its receipt. If eliciting time-preferences -- i.e. being asked to evaluate an intertemporal tradeoff involving different quantities of the good -- likewise compels the agent to consider the consumption decision, present bias arises in the form of a measured quasi-hyperbolic discount function with present bias factor less than one. While reconciling the preference anomalies with core principles of standard utility theory, the results also suggest that the endowment effect and present bias | generally treated as distinct phenomena | are actually manifestations of an identical decision-purview effect. In fact, the elicited present bias equals WTP/WTA.

Chapter 2 introduces a framework for bad habits (namely, addiction) based on endogenous decision points -- i.e. the times a recurring decision is faced. Cravings are interruptive decision points that force an individual to consider consumption while inflicting a small opportunity cost. By extinguishing the craving, addictive consumption brings a brief vacation from unwanted decision points. The development of a habit is jointly characterized by a rising frequency and a rising per-decision level of consumption, matching behavioral patterns that standard habit-formation models do not address. Integrating external cues, modeled as random decision points, consumption routines become regimented as addiction develops. Occasional users are most responsive to cues, while addicts are comparatively immune. With peer consumption as a decision point, the group model predicts synchronized consumption, homogeneous self-sorting, and herd behavior | including imitation of a stray peer.

Chapter 3 complements the endogenous decision points theory of addiction of the previous chapter with a multidisciplinary survey of addiction research, organized and interpreted through the lens of the theory. In particular, I present evidence to support formalizations and results for the three decision point representations: internal cravings, external cues, and peer consumption. This chapter also discusses how the theory may help integrate key addiction concepts from other elds into economic formalism. For instance, I examine the physiological microfoundations of the interval function for cravings, and explain why it can be dierent for two products (e.g. cigarettes and chewing tobacco) that deliver the same product (nicotine). Further, I describe how transitions between abstinence and addiction can be motivated solely in terms of the endogenous interval function." Finally, I propose that the formal notion of cravings as decision points may shed light on three prominent symptoms of