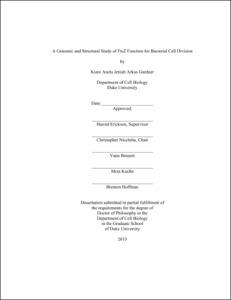 The tubulin homolog FtsZ provides the cytoskeletal framework for bacterial cell division. FtsZ is an essential protein for bacterial cell division, and is the only protein necessary for Z-ring assembly and constriction force generation in liposomes in vitro. The work presented here utilizes structural and genomic analysis methods to investigate FtsZ function for cell division with three separate questions: (1) What is the function of the C-terminal linker peptide in FtsZ? (2) Are there interacting proteins other than those of the divisome that facilitate FtsZ function? (3) Do lateral contact sites exist between protofilaments in the Z ring, resulting in an organized Z-ring substructure?

The FtsZ protein has an ~50 aa linker between the protofilament-forming globular domain and the C-terminal (Ct) membrane-tethering peptide. This Ct linker is widely divergent across bacterial species, and has been thought to be an intrinsically disordered peptide (IDP). We have made chimeras where we have swapped the <italic>Escherichia coli</italic> IDP for Ct linkers from other bacteria, and even for an unrelated IDP from human &alpha-adducin. Most of these substitutions allowed for normal cell division, suggesting that sequence of the IDP did not matter -any IDP appears to work (with some exceptions). Length, however, was important: IDPs shorter than 39 or longer than 89 aa's had compromised function. We conclude that the Ct linker of FtsZ functions as a flexible tether between the globular domain of FtsZ in the protofilament, and its attachment to FtsA and ZipA at the membrane. As a worm-like-chain, the Ct linker will function as a stiff entropic spring linking the constricting protofilaments to the membrane.

Previous work from our laboratory found that mutant and foreign FtsZ that do not normally function for cell division can function upon acquisition of a second site suppressor mutation, somewhere in the <italic>E. coli</italic> genome. We expect that some mutant or foreign FtsZ are partially functional for division in <italic>E. coli</italic>. As such, these FtsZ require another mutation that further enables their function. These suppressing mutations may reveal proteins interacting with FtsZ and the divisome, that have previously been unknown. In the present study, we have identified, via whole genome re-sequencing, single nucleotide polymorphisms that allow 11 different foreign and mutant FtsZ proteins to function for cell division. While we see a trend toward mutations in genes related to general metabolism functions in the cell, we have also identified mutations in two genes, <italic>ispA</italic> and <italic>nlpI</italic>, that may be interacting more directly with the cell division mechanism.

Finally, we have devised a screen to identify mutations in FtsZ that may be involved in lateral bonding between protofilaments. There are presently two proposed models of FtsZ substructure: the scattered or the ribbon model. A major difference between these models is that the scattered model proposed no interaction between adjacent protofilaments in the Z ring, while the ribbon model suggests that adjacent protofilaments are bonded laterally to create an organized substructure of aligned protofilaments. Our screen was designed to identify complementary surface-exposed residues that may be involved in lateral bonding. We initially identified two lateral contact candidate residues: R174, and E250 and mutated them to abrogate FtsZ function. We also mutated L272, which is known to make contacts across the protofilament interface, to look for compensating mutations in these contact residues. Using the screen, we identified a number of secondary mutations in FtsZ that can complement these initial loss-of-function mutations. While this screen has not yielded strong candidates for lateral bonding partners, it has emerged as a high-throughput method for screening large libraries of mutant FtsZ proteins in order to identify compensating mutation pairs.