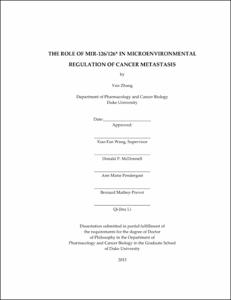 Cancer metastasis is the cause of about 90% of cancer patients' deaths. Despite significant improvements in the past three decades in understanding the molecular bases of oncogenic transformation of cancer cells, little is known about the molecular mechanisms underlying tumour cells' alteration of their microenvironment, entrance into the circulation, and colonization of distant organs. In recent years, accumulating evidence has indicated that tumour microenvironment, which consists of a variety of cell types and extracellular matrix components&#65292;plays an important role in regulating the metastatic abilities of carcinoma cells. Co-opted by cancer cells, those stromal cells promote tumour progression via multiple mechanisms, including enhancement of tumour invasiveness, elevation of angiogenesis, and suppression of immune surveillance activity.

Using a series of human breast cancer cell lines with different metastatic potentials <italic>in vivo</italic>, we performed an unbiased screen examining expression of miRNAs, and found that miR-126 and miR-126*, whose expression are regulated by methylation of the promoter of their host gene Egfl7 inside tumour cells, were significantly negatively correlated with metastatic potential. Using both mouse xenograft models and <italic>in vitro</italic> assays, we showed that this pair of miRNAs suppressed breast cancer metastasis through shaping the tumour microenvironment without changing tumour cell autonomous properties. Specifically, miR-126 and miR-126* act independently to suppress the sequential recruitment of mesenchymal stem cells (MSCs) and inflammatory monocytes into the primary tumour stroma, consequently inhibiting lung metastasis by breast tumour cells. Mechanistically, these miRNAs directly inhibit the production of stromal cell-derived factor-1 alpha (Sdf-1&alpha;, also known as Cxcl12), and indirectly suppress the expression of chemokine (C-C motif) ligand 2 (Ccl2) by the cancer cells within the tumour mass in an Sdf-1&alpha;-dependent manner. In addition, in contrast with the majority of reports which have shown incorporation of only the guiding strand of the miRNA duplex into the mRNA-targeting RNA induced silencing complex (RISC), both strands of the miR-126 RNA duplex are maintained at a similar level and suppress Sdf-1&alpha; expression independently.

Collectively, we have determined a dynamic process by which the composition of the primary tumour microenvironment could be altered via a change in the expression of two tumour-suppressive miRNAs derived from a single miRNA precursor to favor metastasis by breast cancer cells. Importantly, this work provides a prominent mechanism to explain the clinical correlation between reduced expression of miR-126/126* and poor metastasis-free survival of breast cancer patients.