Placing Islam: Alternative Visions of the Morisco Expulsion and Spanish Muslim-Christian Relations in the Sixteenth Century 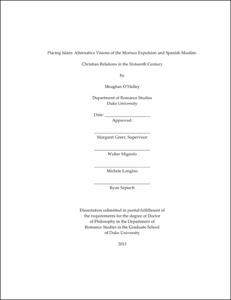 This thesis explores attitudes of Christians toward Islam and Muslims in Spain in the sixteenth century and intends to destabilize Islam's traditional place as adversary in Early-Modern Spanish history. My research aligns itself with and employs new trends in historiography that emphasize dissent and resistance exercised by individuals and groups at all levels of Spanish society in order to complicate popular notions about the extermination of Islam in Spain. I argue that within Spain there was, throughout the sixteenth century and after the expulsion of the Moriscos in the early seventeenth century, a continued interest in the religion and culture of Islam. I show that, far from isolating itself from Islam, Christian Spain was engaged with Muslims on multiple levels. The voluntary and involuntary migration of Spaniards to Muslim lands, for many emigrants of Christian decent, led to the embrace of a multicultural, multireligious, polylingual and polyethnic reality along the Mediterranean that was contrary to Spanish Counter-Reformation ideology. The dissertation includes textual examples from sixteenth-century Spanish and colonial "histories," and works by Cervantes, to support the argument that this official ideology, which has dominated historiography on this period, does not reflect much of the Spanish experience with non-Christians within and without its borders. My goal is to expose a context within the field of Early-Modern Peninsular studies for alternative forms of discourse that emphasize toleration for religious and cultural difference, interfaith and intercultural dialogue and exchange, and a basic interest in and curiosity about Islamic ways of life.