Toussaint Louverture and Haiti's History as Muse: Legacies of Colonial and Postcolonial Resistance in Francophone African and Caribbean Corpus 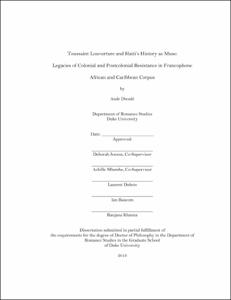 This dissertation explores the themes of race and resistance in nineteenth-century Haitian writings and highlights their impact on French-speaking nineteenth- and twentieth-century African and Caribbean literature. This exploration spans across literary genres and centuries, and juxtaposes disciplines that are rarely put into dialogue with each other. Central to my approach is an interdisciplinary perspective that sheds light on the key interactions between colonial history, legal decrees, anthropology and engaged literature in nineteenth-century French and Francophone studies. And in charting the impact of these writings on the twentieth-century Francophone landscape, this project also addresses current debates in Caribbean, French and Haitian studies and contributes to the growing literature in black Atlantic and postcolonial studies. This research project begins by analyzing rhetorical representations of race and resistance in rare texts from Toussaint Louverture, Pompée-Valentin de Vastey and Juste Chanlatte, in particular with respect to their representations of the Haitian revolution (1791-1804), the only successful slave revolt in history to have resulted in the creation of a new state. By focusing on how Louverture, Vastey and Chanlatte responded to slavery, pseudo-scientific theories of racial difference, and the pernicious effects of the colonial system, it explores both the significance of the revolution's literary representation and the extent of its impact on postcolonial imaginations in Haiti, and the rest of the Caribbean, Africa and France. In particular, I analyze the impact these texts had on subsequent African and Caribbean literature by Emeric Bergeaud, Joseph-Anténor Firmin, Marie Vieux-Chauvet, Aimé Césaire, Edouard Glissant, and Bernard Dadié.