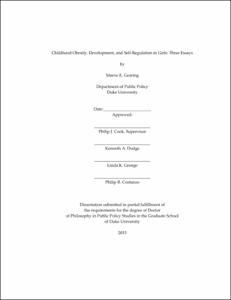 This dissertation encompasses three essays which examine the development of obesity in black and white girls and its responses to interventions.

The first chapter asks the question, how does obesity develop in girls? Using the National Growth and Health Study (NGHS), a longitudinal study of 2400 girls from age 9 to age 18, this chapter aims to address gaps in knowledge about the development and persistence of obesity in girls. Analyses using multivariate regression and growth-mixture modeling describe trajectories of body mass change in children and their correlates. Results suggest that obesity in children begins early and persists in most cases--BMI at age 17 is, on average, 1.3 times BMI at age 9. However, change does occur; 0.8 percent of the sample move from being obese at age 9 to healthy weight at age 17, and 2.2 percent of the sample make the reverse journey from healthy weight to obese. Where change occurs, it is most commonly seen among those who socio-demographically were anomalies among their body mass cohort at age 9. These results emphasize the importance of early interventions as well as the need for more study into body mass mutability in population subsamples.

The second chapter investigates 1) what motivates children to pursue weight loss; and 2) what aspects of interventions may most effectively support healthy child motivations and program success. These questions are qualitatively studied among a sample of 45 obese girls aged 9 to 13 girls participating in a behavior modification intervention. In total, 106 interviews were conducted. All of the girls in the study were interested in losing weight, most commonly in order to fit in (n=11), reduce teasing (n=10), or express particular social identities (n=6). However, not all of the girls were able to translate this desire to lose weight into a healthy and effective lifestyle change motivation. Several factors were associated with adopting healthy motivation and behavior, including familial involvement, self-regulation skills, non-social weight desires, realistic weight loss goals, and clear messages about body ideals. Other program protocols also supported motivation during difficult periods for those who adopted healthy motivation, including nutrition information, incentives, lack of physician judgment, and patient autonomy. Finally, two other potential program protocols were mentioned by girls in the study as useful aids. More support services, particularly during the summer, and more information on the expected course of weight loss could, these girls argued, help sustain motivation. Together, these findings suggest a role for self-regulation theory in the design of lifestyle change motivation and for more directly addressing expectations in weight loss treatment.