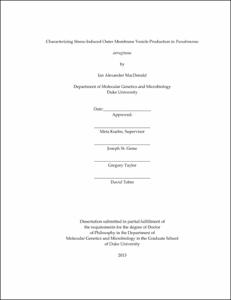 As an opportunistic Gram-negative pathogen, Pseudomonas aeruginosa must be able to adapt to changes and survive stressors in its environment during the course of infection. To aid survival in the hostile host environment, P. aeruginosa has evolved a myriad of virulence factors including the production of an exopolysaccharide capsule, as well as secretion of degradative proteases and lipases that also function as defense mechanisms. Outer membrane vesicles (OMVs) acts as a secretion system to disseminate virulence factors and function as a general bacterial stress response to remove accumulated periplasmic waste. Despite the growing insights of the field into the potential functions of OMVs, the mechanism for formation remains to be fully elucidated. The three proposed mechanisms for OMV formation in P. aeruginosa are mediated by the Pseudomonas quinolone signal PQS, the AlgU envelope stress response pathway, and the periplasmic chaperone MucD. This report investigates how P. aeruginosa responds to sublethal physiological stressors with regards to OMV production levels and whether the proposed mechanisms for OMV formation are required for stress-induced OMV formation. We concluded that exposure to cell wall directed stressors increased OMV production and activity of the sigma factor that controls MucD expression, AlgU. AlgU was shown to be sufficient to induced OMV production upon overexpression; however, stress-induced OMV production was not dependent on activation of AlgU as vesiculation could be induced in strains lacking AlgU. Furthermore, MucD levels were not inversely proportional to OMV production under acute stress, and the ability to produce PQS was not required for OMV production. Finally, an investigation of the response of P. aeruginosa to oxidative stress revealed that hydrogen peroxide-induced OMV production requires the presence of B-band but not A-band lipopolysaccharide. We also demonstrated that the ability for P. aeruginosa to sense oxidative stress via OxyR, was important for hydrogen peroxide-induced OMV production, by a yet to be determined method. Together these results demonstrate that current proposed mechanisms for OMV formation do not universally apply under all stress conditions, and that additional mechanisms for OMV formation are still to be identified and fully elucidated during acute stress in P. aeruginosa.