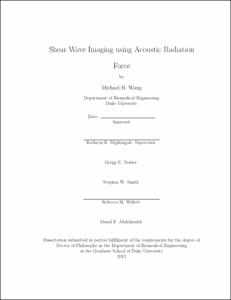 Tissue stiffness can be an indicator of various types of ailments. However, no standard diagnostic imaging modality has the capability to depict the stiffness of tissue. To overcome this deficiency, various elasticity imaging methods have been proposed over the past 20 years. A promising technique for elasticity imaging is acoustic radiation force impulse (ARFI) based shear wave imaging. Spatially localized acoustic radiation force excitation is applied impulsively to generate shear waves in tissue and its stiffness is quantified by measuring the shear wave speed (SWS).

The aim of this thesis is to contribute to both the clinical application of ARFI shear wave imaging and its technical development using the latest advancements in ultrasound imaging capabilities.

To achieve the first of these two goals, a pilot imaging study was conducted to evaluate the suitability of ARFI shear wave imaging for the assessment of liver fibrosis using a rodent model of the disease. The stiffness of severely fibrotic rat livers were found to be significantly higher than healthy livers. In addition, liver stiffness was correlated with fibrosis as quantified using collagen content.

Based on these findings, an imaging study was conducted on patients undergoing liver biopsy at the Duke University Medical Center. A robust SWS estimation algorithm was implemented to deal with noisy patient shear wave data using the random sample consensus (RANSAC) approach. RANSAC estimated liver stiffness was found to be higher in severely fibrotic and cirrhotic livers, suggesting that ARFI shear wave imaging may potentially be useful for the staging of severe

To achieve the second aim of this thesis, a system capable of monitoring ARFI induced shear wave propagation in 3D was implemented using a 2D matrix array transducer. This capability was previously unavailable with conventional 1D arrays. This system was used to study the precision of time-of-flight (TOF) based SWS estimation. It was found that by placing tracking beam locations at the edges of the SWS measurement region of interest using the 2D matrix array, TOF SWS precision could be improved in a homogeneous medium.

The 3D shear wave imaging system was also used to measure the SWS in muscle, which does not conform to the isotropic mechanical behavior usually assumed for tissue, due to the parallel arrangement of muscle fibers. It is shown that the SWS along and across the fibers, as well as the 3D fiber orientation can be estimated from a single 3D shear wave data-set. In addition, these measurements can be made independent of the probe orientation relative to the fibers. This suggests that 3D shear wave imaging can be useful for characterizing anisotropic mechanical properties of tissue.