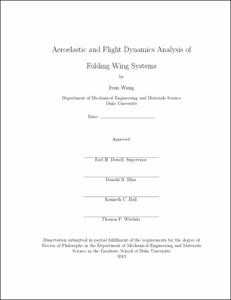 This dissertation explores the aeroelastic stability of a folding wing using both theoretical and experimental methods. The theoretical model is based on the existing clamped-wing aeroelastic model that uses beam theory structural dynamics and strip theory aerodynamics. A higher-fidelity theoretical model was created by adding several improvements to the existing model, namely a structural model that uses ANSYS for individual wing segment modes and an unsteady vortex lattice aerodynamic model. The comparison with the lower-fidelity model shows that the higher-fidelity model typical provides better agreement between theory and experiment, but the predicted system behavior in general does not change, reinforcing the effectiveness of the low-fidelity model for preliminary design of folding wings. The present work also conducted more detailed aeroelastic analyses of three-segment folding wings, and in particular considers the Lockheed-type configurations to understand the existence of sudden changes in predicted aeroelastic behavior with varying fold angle for certain configurations. These phenomena were observed in carefully conducted experiments, and nonlinearities - structural and geometry - were shown to suppress the phenomena. Next, new experimental models with better manufacturing tolerances are designed to be tested in the Duke University Wind Tunnel. The testing focused on various configurations of three-segment folding wings in order to obtain higher quality data. Next, the theoretical model was further improved by adding aircraft longitudinal degrees of freedom such that the aeroelastic model may predict the instabilities for the entire aircraft and not just a clamped wing. The theoretical results show that the flutter instabilities typically occur at a higher air speed due to greater frequency separation between modes for the aircraft system than a clamped wing system, but the divergence instabilities occur at a lower air speed. Lastly, additional experimental models were designed such that the wing segments may be rotated while the system is in the wind tunnel. The fold angles were changed during wind tunnel testing, and new test data on wing response during those transients were collected during these experiments.