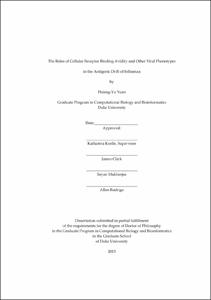 Despite high vaccination rates and effective adaptive immune responses from the part of infected individuals, influenza A viruses cause significant morbidity and mortality annually. This is due to influenza's rapid antigenic evolution, whereby continual mutations occurring in epitope regions of the virus's hemagglutinin protein result in the diminishment of long-term antibody recognition, in a process that has been termed `antigenic drift'. Although it is clear that antigenic drift enables previously infected individuals to become reinfected, the mechanism that is responsible for influenza's antigenic drift is still under debate. As recently as 2009, a new hypothesis of antigenic drift was put forward that argues that binding avidity changes in the viral hemagglutinin result in antigenic drift as a side effect. This hypothesis stands in contrast to the traditionally accepted hypothesis that mutations in epitope regions are positively selected for their ability to evade immune recognition. This thesis focuses on the use of epidemiological models and empirical data analysis to explore different hypotheses of antigenic drift.

In the first chapter, I am asking what effects on antigenic drift rate would be produced under the new hypothesis. I mathematically formulate the hypothesis that antigenic drift is simply a side effect of cellular receptor binding avidity changes that occur as the virus is transmitted between individuals of different immune status levels. I then use this formulation to explore how influenza's rate of antigenic drift depends on different epidemiological factors, including host contact rate, host lifespan, and the duration of infection. Finally, I use the model to assess alternative vaccination strategies by the impact they have on rates of antigenic drift and therewith rates of disease incidence/

In the third chapter, I develop an integrated viral life cycle model, in which viral replication depends on three viral phenotypes: receptor binding avidity, neuraminidase activity, and antigenicity. This integrated model recognizes that receptor binding avidity changes will influence viral replication, but also allows for antigenic evolution to be brought about directly by epitope changes. I first use this model to show how the evolutionary dynamics of these phenotypes are dependent on one another and how antigenic drift can be interpreted within this framework. I then return to some of the questions addressed in the first chapter to ask how different epidemiological factors impact influenza's rate of antigenic drift.

Together, these three chapters highlight the importance of viral phenotypes other than antigenicity in contributing to influenza's antigenic evolution, and, more generally, the importance of computational and mathematical research in understanding constraints on viral adaptation.