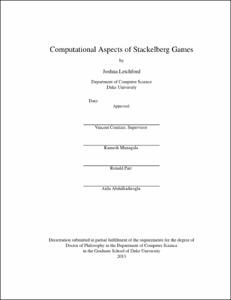 Game theory involves the study of how self-interested agents interact in various settings. Perhaps the best-known game theoretic solution concept is that of Nash equilibrium. However, Nash equilibrium makes a number of assumptions, such as rationality of all of the players and the ability of the players to choose the same equilibrium when more than one exists. Because of these assumptions, it is unclear if simply solving for Nash equilibrium is always the correct thing to do. In some settings, one player can instead credibly commit to a strategy, and communicate this to the other player, before the other player can make a decision. This has become known as a Stackelberg game. Computing optimal strategies to commit to in normal-form or Bayesian Stackelberg games is a topic that has recently been gaining attention, in part due to the application of such algorithms in various security and law enforcement scenarios. My work on Stackelberg games falls into three main areas.

First, I focus on general games, where we give efficient algorithms and hardness results for Bayesian, extensive-form and stochastic games. In each of these settings we study the relationship between different modeling assumptions and the tractability of finding an optimal strategy to commit to. For Bayesian games our results are mainly negative; we show that not only are the problems here NP-hard, but in many cases they are also inapproximable. Our results for extensive-form games are more mixed; we are able to give polynomial time algorithms for four cases. However, we also show that if we relax the assumptions made in these four cases, then the problem usually becomes NP-hard. Finally, our results for stochastic games are again somewhat negative, as we show that the problem is NP-hard is most reasonable cases. However, here we are also able to give an approximation algorithm to compute optimal commitment strategies in a setting where correlation is allowed.

I next focus on Stackelberg security games. Stackelberg security games usually involve the scheduling of scarce defense resources to cover some subset of potential targets. We first study methods for going from marginal solutions (which ignore overlapping coverage between different schedules) to valid mixed commitment strategies in graphical settings. Here we are able to characterize two new classes of games where mixed strategies corresponding to the marginal probabilities are guaranteed to exist, and give algorithms for finding them. Next, we offer a simple model of interdependencies between nodes in a network based on probabilistic failure cascades, extending the well-known independent cascade model of the spread of infectious diseases or ideas. We give an algorithm for this problem and experimentally show that this algorithm scales to realistic security settings and outperforms the state of-the-art alternatives. Finally, we create an approach for optimal interdiction of attack plans. We show how to model an attack plan interdiction problem as a large-scale integer linear program similar to an integer programming approach for solving partial satisfaction planning problems. We also give several oracle-based approaches for solving this and then evaluate them experimentally.