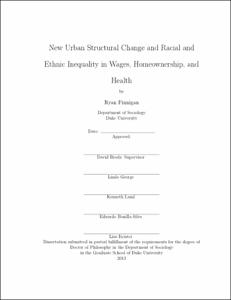 In 2010, approximately 84% of the American population lives in a metropolitan area. Different metropolitan areas are characterized by distinct labor markets and economies, housing markets and residential patterns, socioeconomic and demographic factors, and according to some, even distinct 'spirits.' The nature and influence of such structural factors lie at the heart of urban sociology, and have particularly profound effects on patterns of racial and ethnic stratification. This dissertation examines new urban structural changes arising within recent decades, and their implications for racial/ethnic stratification. Specifically, I study the transition to the 'new economy' and racial/ethnic wage inequality; increases in the level and inequality of housing prices and racial/ethnic stratification in homeownership; and increased income inequality, combined with population aging, and racial/ethnic disparities in disability and poor health. I measure metropolitan-level structural factors and racial/ethnic inequalities with data from 5% samples of the 1980, 1990, and 2000 Censuses; the 2010 American Community Survey (ACS); and the 1999-2001 and 2009-2011 Current Population Surveys (CPS). Cross-sectional multilevel regression models examine the spatial distributions of structural factors and racial/ethnic inequality, and the fixed-effects regression models identify the impact of changes in structural factors over time on observed trends in racial stratification. Additionally, I distinguish between effects on minority-white gaps in resource access, and minorities' levels of resource access. This dissertation also makes novel contributions to the field by empirically documenting complex patterns of inequalities among the country's four largest racial and ethnic groups. Perhaps most relevant to theories of racial stratification, this dissertation demonstrates seemingly race-neutral structural changes can have racially stratified effects.

Chapter 1 describes the foundational literature in urban sociology and racial/ethnic stratification, and provides an overview of the subsequent chapters. Chapter 2 measures the transition to the `new economy' with six structural factors of labor markets: skill-biased technological change, financialization, the rise of the creative class, employment casualization, immigration, and deunionization. Overall, the results indicate the observed Latino-white wage gap may be up to 40% larger in 2010 than in the theoretical absence of the new economy, and the black-white wage gap may be up to 31% larger. Chapter 3 focuses on the long-term trend toward higher and more unequally distributed home prices within local housing markets, epitomized by the housing crisis of the late 2000s. Increases in housing market inequality worsen the Asian-white homeownership gap, but narrow the black-white and Latino-white gaps. However, the level of homeownership is reduced for all groups. Chapter 4 empirically tests the frequently-debated Income Inequality Hypothesis, that macro-level income inequality undermines population health, and hypothesizes any negative effect on health is stronger in areas with greater population aging. The results provide no support for the Income Inequality Hypothesis or any of its proposed extensions, but the chapter's analytic approach may be fruitfully applied to future examinations of structural determinants of health. The theoretical and substantive conclusion of the dissertation is that metropolitan areas represent salient, and changing structural contexts that significantly shape patterns racial/ethnic stratification in America.