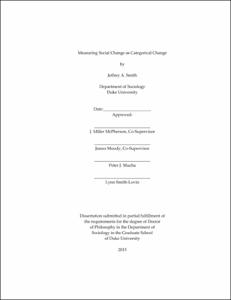 Sociologists often depict demographic categories as socially constructed, non-essential, and fluid. The language of fluid, contingent categories has not, however, translated very well into the practice of describing social change in a population. There are notable exceptions, but the typical approach is still to take fixed demographic categories, such as Black/White, and follow their outcomes over time. The first goal of this dissertation is to bridge the gap between theory and practice by offering a formal framework for measuring categorical fluidity. The second goal is to use changes in categorical meaning to explore the macro features of a social system.

First, I develop a model of categorical change rooted in interaction patterns, such as marriage or friendship rates. Interaction patterns offer an ideal metric to measure fluid demographic categories: they concretely capture social distinctions without relying solely on pre-defined labels. I consider two categories to be equivalent if the observed behavioral implications of group membership are the same, even if the labels are different. If College graduates now interact in the same manner as High School graduates used to, then College is the new HS. To formalize this idea, I place categories into social locations based on observed rates of interaction. Categories are close if interaction is likely and far if interaction is unlikely. I then ask which categories occupy the same locations over time, or have the same range of interaction partners.

Second, I apply this model to the question of racial change in America. I interpret two macro level changes, one demographic and one political, through the lens of categorical change. Demographically, there have been large increases in the number of Hispanics identifying as Other racially, as opposed to White or Black. Using Census marriage data, I find that this increase in Other-Hispanics reflects a schism in the meaning of Hispanic. The shifts in social locations point to a growing divide between those that see Hispanic as another race and those that do not. Politically, there have been large changes in the measurement of race, with individuals now allowed to claim multiple races in the census. I ask how these "new" mixed race categories fit into the existing racial order. I find that the Hispanic mixed race categories create distinct categories in a way that the mixing of traditional racial/ethnic categories does not.

Third, I use the model of categorical change to test theories of power and influence. I argue that the meaning of a category amongst one part of the population may be shaped by the experience, or changing conditions, of another part of the population. This asymmetry serves as the measure of aggregate level influence. Substantively, I apply this approach to racial stratification in the US, where I use joint changes in educational meaning and attainment to characterize systems of racial stratification from 1940-2000. Using Census data on race and education, I find that the US is characterized by a system of hegemony, where changes in attainment amongst the majority drive the meaning of education for other racial groups.