Structural and Kinetic Characterization of LpxK, the Tetraacyldisaccharide-1- Phosphate Kinase of Lipid A Biosynthesis 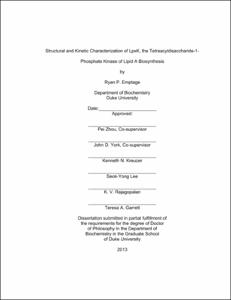 Lipopolysaccharide, the physical barrier that protects Gram-negative bacteria from various antibiotics and environmental stressors, is anchored to the outer membrane by the phosphorylated, acylated disaccharide of glucosamine known as lipid A. Besides being necessary for the viability of most Gram-negative bacteria, lipid A interacts directly with specific mammalian immune cell receptors, causing an inflammatory response that can result in septic shock. The lipid A biosynthetic pathway contains nine enzymatic steps, the sixth being the phosphorylation of the tetraacyldisaccharide-1-phosphate (DSMP) precursor to form lipid IVA by the inner membrane-bound kinase LpxK, a divergent member of the P-loop containing nucleotide triphosphate hydrolase superfamily. LpxK is the only known P-loop kinase to act on a lipid at the membrane interface.

We report herein multiple crystal structures of <italic>Aquifex aeolicus</italic> LpxK in apo as well as ATP, ADP/Mg<super>2+</super>, AMP-PCP, and chloride-bound forms. LpxK consists of two &alpha;/&beta;/&alpha; sandwich domains connected by a two-stranded &beta;-sheet linker. The N-terminal domain, which has most structural homology to other P-loop kinase family members, is responsible for catalysis at the P-loop and positioning of the DSMP substrate for phosphoryl transfer on the inner membrane. The smaller C-terminal domain, a substructure unique to LpxK, helps bind the nucleotide substrate using a 25º hinge motion about its base which also assembles the necessary catalytic residues at the active site.

Using a thin-layer chromatography-based radioassay, we have performed extensive kinetic characterization of the enzyme and demonstrate that LpxK activity <italic>in vitro</italic> is dependent on the presence of detergent micelles, the use of divalent cations, and formation of a ternary LpxK-ATP/Mg<super>2+</super>-DSMP complex. Implementing steady-state kinetic analysis of multiple point mutants, we identify crucial active site residues. We propose that the interaction of D99 with H261 acts to increase the pKa of the imidazole group, which in turn serves as the catalytic base to deprotonate the 4&rsquo;-hydroxyl of DSMP. An analogous mechanism has not yet been reported for any member of the P-loop kinase family.

The membrane/lipid binding characteristics of LpxK have also been also investigated through a crystal structure of the LpxK-lipid IVA product complex along with point mutagenesis of residues in the DSMP binding pocket. Critical contacts with the bound lipid include interactions along the glucosamine backbone and the 1-position phosphate group, especially through R171. Furthermore, analysis of truncation mutants of the N-terminal helix of LpxK demonstrates that this substructure is a critical hydrophobic contact point with the membrane, and that both charge-charge and hydrophobic interactions contribute to the localization of LpxK at the lipid bilayer.

Overall, this work has contributed significantly to the limited knowledge surrounding membrane-bound enzymes that act upon lipid substrates. It has also provided insight into the process of enzyme evolution as LpxK, while containing a similar core domain as other P-loop kinases, has developed multiple subdomains required for both cellular localization and recognition of novel substrates. Finally, the presence of multiple crystal structures and detailed understanding of the LpxK catalytic mechanism will improve the chances of successfully targeting this essential step in lipid A biosynthesis in the pursuit of novel antimicrobials.