The Growth and Activity of Genetically Diverse Prochlorococcus 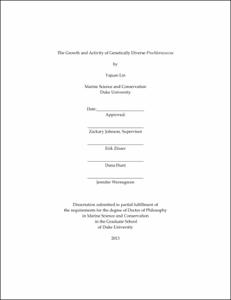 While much is known about the abundance and genetic diversity of environmental microbial communities, little is known about their taxon-specific activity. In this thesis I address this gap using a model marine microbe, the cyanobacterium <italic>Prochlorococcus spp.</italic>, which numerically dominates tropical and subtropical open oceans and encompasses a group of genetically defined clades that are ecologically distinct. Ribosomal RNA is a promising indicator of in situ activity because of its essential role in protein synthesis as well as its phylogenetic information, which could be used to distinguish clades among mixed populations. Here I show that, in a laboratory system the specific growth rate of representative <italic>Prochlorococcus</italic> strains could be quantitative predicted from cellular rRNA content (assessed by RT-qPCR), cell size (assessed by flow cytometry) and temperature. Applying this approach in the field, I show unique clade-specific activity patterns for <italic>Prochlorococcus</italic>. For example, vertically within the euphotic zone, eHL-II activity is strongly impacted by light and is consistent with patterns of photosynthesis and on a horizontal transect from Hawaii to San Diego, eHL-I and eHL-II activities exhibit significant transitions and appear to be regulated by temperature, nutrient and vertical mixing gradients. Using ribosomal tag pyrosequencing of DNA and RNA, I have extended our observation to the Eubacterial community and described the biomass distribution (rDNA) and activity (rRNA) patterns from two representative depths (25 and 100 m) at a well-studied oligotrophic ocean station. These results show that for some populations the abundances and activities are significantly uncoupled, which suggests substantial top-down controls or physical transport processes. Further exploring the taxon-specific activity patterns along with abundances and environmental variables across time and space is essential to better understanding the dynamics of a complex microbial system as well as predicting the consequences of environmental change.