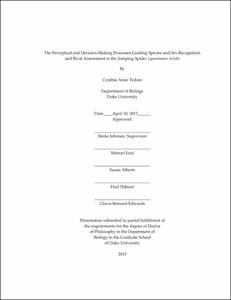 The goal of this dissertation was to better clarify the sensory and cognitive capabilities and limitations of a size-constrained animal. Because visually-guided behaviors are more experimentally tractable than behaviors guided by other sensory modalities, I chose to study a small animal with an unusually good visual system and a suite of apparently visually-guided behaviors, the jumping spider Lyssomanes viridis (Salticidae). Jumping spiders' principal eyes, which are adapted for the perception of shape and pattern, have the highest measured acuity of any arthropod, but also the narrowest field of view, making salticids a particularly interesting study system for measuring the capabilities and limitations of a tiny animal with small yet apparently highly functional eyes. For my dissertation, I examined the amount and type of visual information gathered in high-stakes encounters; i.e. species and sex recognition and male-male contests over females. In salticids, the wrong assessment of species and sex or fighting ability carries with it the risk of injury or even death. Thus, more information, and especially high-resolution information, should be particularly adaptive in such encounters, and should provide us with a good proxy of the perceptual and cognitive capabilities and limitations of this small animal.

In chapter three, I looked for correlations between various visual features and contest success in order to determine what types of visual information opponents could theoretically use to assess their opponents' resource holding potential in contests over females. I found that all measured size-related traits correlated strongly with contest success, but that coloration did not, except in the rare cases in which a smaller male won a contest. In these encounters, males who won, despite being smaller, had less red chelicerae than their opponents. Finally, in chapter four, I used the results of chapter three to begin assessing whether the traits that correlate with contest success are actually assessed by males, and in particular, whether they are assessed visually. To do this, I presented males with various sizes of computer-animated opponents, and found that males were less likely to threaten larger opponents. Thus, males seem to be using visual cues to gather information about the size of their opponents. Whether they evaluate overall size, or more specifically, the size of their opponents' weapons, will be addressed in future work.