Fictions of Trauma: The Problem of Representation in Novels by East and Central European Women Writing in German 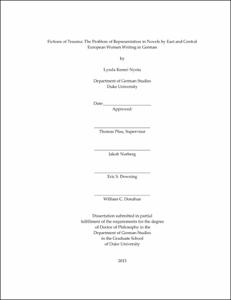 This dissertation focuses on the fictional narratives of Eastern and Central European women authors writing in German and explores the ways in which historical and political trauma shapes their approach to narrative. By investigating the atrocities of the World War II era and beyond through a lens of trauma, I look at the ways in which their narrative writing is disrupted by traumatic memory, engendering a genre that calls into question official accounts of historical events. I argue that without the emergence and proliferation of these individual trauma narratives to contest, official, cemented accounts, there exists a threat of permanent inscription of official versions into public consciousness, effectively excluding the narratives of communities rendered fragile by war and/or displacement. The dissertation demonstrates how these trauma fictions i) reveal the burden of unresolved, transmitted trauma on the second generation as the pivotal generation between the repressive Stalinist era and the collapse of communism, ii) disrupt official accounts of events through the intrusion of individual traumatic memory that is by nature unmediated and uncensored, iii) offer alternative plural accounts of events by rejecting normal everyday language as a vehicle for narrative and instead experimenting with alternative modes of representation, articulating trauma through poetic language, through spaces, and through the body, and v) struggle against theory, while paradoxically often succumbing to the very same institutionalized language of trauma that they seek to contest. Trauma fiction therefore emerges as a distinct genre that forestalls the threat of erasure of alternative memories by constantly challenging and exposing the equivocal nature of official narratives, while also pointing to the challenges faced in attempting to give a voice to groups that have suffered trauma in an age where the term has become embedded and overused in our everyday language.