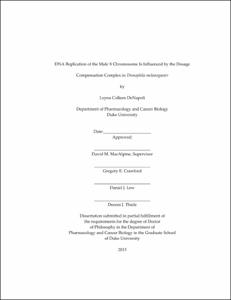 DNA replication is an integral part of the cell cycle. Every time a cell divides, the entire genome has to be copied once and only once in a timely manner. In order to accomplish this, DNA replication begins at many points throughout the genome. These start sites are called origins of replication, and they are initiated in a temporal manner throughout S phase. How these origins are selected and regulated is poorly understood. Saccharomyces cerevisiae and Schizosaccharomyces pombe have autonomously replicating sequences (ARS) that can replicate plasmids extrachromosomally and function as origins in the genome. Metazoans, however, have shown no evidence of ARS activity.

DNA replication is a multistep process with several opportunities for regulation. Potential origins are marked with the origin recognition complex (ORC), a six subunit complex. In S. cerevisiae, ORC binds to the ARS consensus sequence (ACS), but no sequence specificity is seen in S. pombe or in metazoans. Therefore, factors other than sequence play a role in origin selection.

In G1, the pre-replicative (pre-RC) complex assembles at potential origins. This involves the recruitment of Cdc6 and Cdt1 to ORC, which then recruits MCM2-7 to the origin. In S phase, a subset of these pre-RC marked origins are initiated for replication. These origins are not fired simultaneously; instead, origins are fired in a temporal manner, with some firing early, some firing late, and some not firing at all.

We mapped the replication timing profiles of three cell lines derived from Drosophila melanogaster by pulsing cells with the nucleotide analog bromodeoxyuridine (BrdU), enriching for actively replicating DNA labeled with BrdU, sequencing with high throughput sequencing and mapping the sequences back to the genome. We found that the X chromosome of the male cell lines replicated earlier than the X chromosome in the female cell line or the autosomes. We were then able to compare the replication timing profiles to data sets for chromatin marks acquired through the modENCODE (model organism Encyclopedia Of DNA Elements). We found that the early replicating regions of the male X chromosomes correlates with acetylation of lysine 16 on histone 4 (H4K16).

We hypothesized that the activities of the DCC and the hyperacetylation of H4K16 also influences DNA replication timing. To test this, I knocked down components of the DCC (MSL2 and MOF) using RNAi. Cells were arrested in early S phase with hydroxyurea, released, and pulsed with the nucleotide analog EdU. The cells were arrested in metaphase and labeled for H4K16 acetylation and EdU. We found that male cells were preferentially labeled with EdU on the X chromosome, which corresponded with H4k16 acetylation. When the DCC was knocked down, H4K16 acetylation was lost along with preferential EdU labeling on the X chromosome. These results suggest that the DCC and H4K16 acetylation are necessary for early replication of the X chromosome. Additionally, early origin mapping of different cell lines showed that while ORC density does not differ between male and female cell lines, early origin usage is increased on the X chromosome of males, suggesting that this phenomenon is regulated at the level of activation, not pre-RC formation. Other experiments in female cell lines have been unclear about whether the DCC and subsequent H4K16Ac is sufficient for early X replication. However, these results are exciting because this is, to our knowledge, the first mark that has been found to directly influence replication timing.

In addition to these timing studies, I attempted to design a new way to map origins. A consequence of unidirectional replication with bidirectional replication fork movement is Okazaki fragments. These are short nascent strands on the lagging strand of replicating DNA. Because these fragments are small, we can isolate them by size and map them back to the genome. Okazaki density could tell us about origin usage and any directional preferences of origins. The process proved to be tedious, and although they mapped back with a higher density around ORC binding sites than randomly sheared DNA, little information about origin usage was garnered from the data. Additionally, the process proved difficult to repeat.