Probing the Bioeffects of Cavitation at the Single-Cell Level 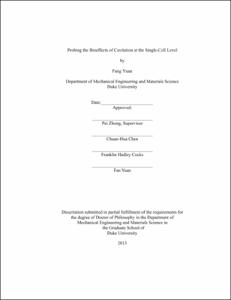 The primary goal of this dissertation research is to develop an experimental system and associated techniques that can be used to investigate the bioeffects produced by cavitation bubbles at the single cell level. Such information has been lacking due to the randomness and complexity in cavitation inception and subsequent bubble-bubble interaction generated by an acoustic field typically used in therapeutic ultrasound applications. Connection between cavitation activities and bioeffects produced in cells nearby presents another challenge that has not been resolved satisfactorily. In this work, we developed a laser-based system for generating tandem bubbles with a maximum diameter about 50 µm (i.e., on the scale of a single cell) in a microfluidic channel of 25 µm in height and 800 µm in width. We further developed techniques for micropatterning of individual gold dots (15 nm thick and 6 µm in diameter) used for bubble generation, which are precisely aligned at various stand-off distances (SD) from individual islands (32 x32 µm2) coated with fibronectin used for cell adhesion. The dynamics of tandem bubble interaction with resultant jet formation, microstreaming and vortex flow in the microfluidic channel were captured by high-speed imaging and particle image velocimetry (PIV). The deformation of the target cell was recorded by high-speed imaging as well (using a second camera) immediately after the tandem bubble interaction and assessment of membrane strain was aided with 2 µm sized polystyrene beads attached to the cell membrane. Membrane poration was characterized by uptake of fluorescent propodium iodide (PI) into the target cell, from which the normalized maximum pore size was estimated. Using this experimental system, we have observed the complete process of bubble-bubble interaction with resultant jetting flow, cell deformation, and localized pinpoint membrane rupture with progressive diffusion of macromolecules into the target cell. Furthermore, we observed a clear SD dependence in the treatment outcome produced by the tandem bubbles. At short SD of 10 µm, all treated cells underwent necrosis with high yet unsaturated level of PI uptake, indicating that the cell could not reseal the poration site. At intermediate SD of 20 ~ 30 µm, 58% to 80% of the cells were observed to have repairable membrane poration with low to medium but saturated level of PI uptake. At long SD of 40 µm, no detectable PI uptake was observed, corresponding to no membrane compromise. Within the repairable membrane poration group, the sub-population of cells that eventually survived without apoptosis increased from about 9% at SD of 20 µm with strong adhesion to about 70% at SD of 30 µm with no adhesion at the leading edge facing the jetting flow. The maximum PI uptake, pore size, and membrane strain estimated could vary by more than an order of magnitude, which is similar to the magnitude of variations in pore size (0.2 ~ 2 µm) produced by tandem bubbles observed by SEM. The large principal strain (> 500%) with associated high strain-rate (> 106*s-1) produced by the tandem bubbles provide a unique tool to examine the bioeffects of cavitation at the single cell level and potentially a diverse range of applications to be explored.