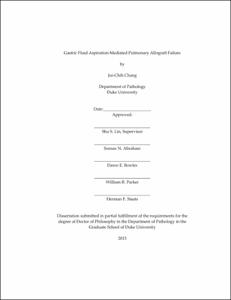 Since its first success in 1983, lung transplantation has become the treatment of choice for selected patients with end stage lung disease. However, long-term graft survival is relatively low compared to other solid organs, such as heart, liver and kidney. The primary factor limiting long-term survival of pulmonary allografts is obliterative bronchiolitis (OB), a form of chronic pulmonary graft rejection characterized by submucosal fibroproliferation of the small airways, which leads to luminal compromise and respiratory failure. Due to their unique anatomic location, lungs are exposed to environmental factors in the air which include potentially toxic agents. This suggests a possible importance of non-alloimmune mediated factors in the pathogenesis of pulmonary rejection in addition to alloimmunity.

Clinical reports reveal that gastroesophageal reflux disease (GERD) is commonly observed following lung transplantation, and it has been postulated that GERD after lung transplantation could accelerate the development of OB and subsequent lung allograft failure. Although clinical studies point to the importance of GERD in the survival of the transplant, the potential effects of GERD on pulmonary allografts still need to be identified. In this dissertation, the effects of GERD on pulmonary allografts, including ischemia-reperfusion (I-R) injury and the pH of the gastric fluid aspirate, are evaluated. Further, this dissertation explores the mechanisms by which GERD affects chronic lung allograft rejection, particularly the role played by mast cells in rejection.

Also, it remains unknown whether pharmaceutical-induced increases in gastric pH might effectively prevent pulmonary injury associated with chronic aspiration. The hypothesis that neutralization of gastric fluid would affect the development of aspiration-associated OB was tested. The results, described in Chapter 3, revealed that the pH of the aspirated gastric fluid did not significantly affect pulmonary graft rejection. This finding suggests that clinical management of lung transplant patients with GERD should probably include more than just pharmaceutical blockage of gastric protons and/or antacid to neutralize the pH of gastric fluid.