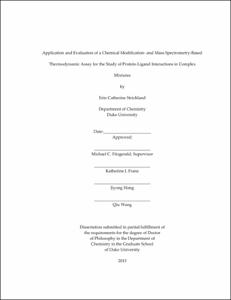 While a number of different proteomic, genomic, and computational approaches exist for the characterization of drug action, each of the experimental approaches developed to date has both strengths and weaknesses. Currently, there is no one "perfect" assay for drug mode-of-action studies. A protocol that could assay all the proteins in the proteome for both direct and indirect binding interactions of drugs would greatly facilitate studies of drug action. Recently, the SPROX (stability of proteins from rates of oxidation) technique was developed as a chemical modification- and mass spectrometry-based strategy for detecting protein-ligand interactions by monitoring the change in thermodynamic stability of proteins upon ligand binding. This is accomplished by monitoring the denaturant dependent oxidation of globally protected methionine residues. The SPROX technique has been interfaced with bottom-up proteomics methods to allow for the proteome-wide analysis of protein-ligand interactions. However, the strategy has been limited by the need to detect and quantify methionine containing peptides in the bottom-up proteomics experiment.

The work in this dissertation is focused on evaluating the current SPROX protocol, developing modifications to improve proteome coverage, and applying the SPROX platform to two different drug mode-of-action studies. Three main strategies were employed to improve protein coverage. First, a chemo-selective isolation of un-oxidized methionine containing peptides was employed to enrich for methionine containing peptides, and it was found to produce a ~2-fold improvement in proteomic coverage. Second, a pre-fractionation strategy involving the use of isoelectric focusing was employed to decrease sample complexity prior to LC-MS/MS analysis and it was found to generate a ~2-3 fold improvement in proteomic coverage, however when combined with the methionine enrichment strategy the improvement was ~6-fold as the benefits of both were additive. Third, a tryptophan modification strategy was developed that could ultimately expand the number of useful peptides in proteome-wide SPROX experiments to include those that contain tryptophan. Also, investigated was the use of several different mass spectrometer systems (including a bench-top quadrupole and orbitrap system and two different quadrupole time-of-flight systems) in the SPROX protocol. The results of these studies indicate that there is a significant advantage in proteome coverage when faster mass spectrometers are used. The use of high energy collision dissociation (HCD) in the orbitrap system was also more advantageous than the use of collision induced dissociation (CID) in the Q-ToF systems. Regardless of the mass spectrometer used, the major source of error in the SPROX experiment was found to be the random error associated with the LC-MS/MS analysis of isobaric mass tagged peptides. This random error was found to yield a false discovery rate of between 3 and 10% for "hit" peptides in the SPROX experiment.