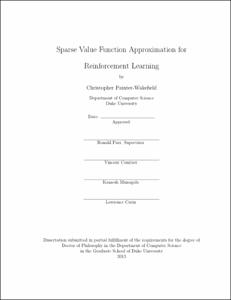 One method for obtaining sparse linear approximations is the inclusion in the objective function of a penalty on the sum of the absolute values of the approximation weights. This <italic>L1</italic> regularization approach was first applied to temporal difference learning in the LARS-inspired, batch learning algorithm LARS-TD. In our first contribution, we define an iterative update equation which has as its fixed point the <italic>L1</italic> regularized linear fixed point of LARS-TD. The iterative update gives rise naturally to an online stochastic approximation algorithm. We prove convergence of the online algorithm and show that the <italic>L1</italic> regularized linear fixed point is an equilibrium fixed point of the algorithm. We demonstrate the ability of the algorithm to converge to the fixed point, yielding a sparse solution with modestly better performance than unregularized linear temporal difference learning.

Our second contribution extends LARS-TD to integrate policy optimization with sparse value learning. We extend the <italic>L1</italic> regularized linear fixed point to include a maximum over policies, defining a new, "greedy" fixed point. The greedy fixed point adds a new invariant to the set which LARS-TD maintains as it traverses its homotopy path, giving rise to a new algorithm integrating sparse value learning and optimization. The new algorithm is demonstrated to be similar in performance with policy iteration using LARS-TD.

Finally, we consider another approach to sparse learning, that of using a simple algorithm that greedily adds new features. Such algorithms have many of the good properties of the <italic>L1</italic> regularization methods, while also being extremely efficient and, in some cases, allowing theoretical guarantees on recovery of the true form of a sparse target function from sampled data. We consider variants of orthogonal matching pursuit (OMP) applied to RL. The resulting algorithms are analyzed and compared experimentally with existing <italic>L1</italic> regularized approaches. We demonstrate that perhaps the most natural scenario in which one might hope to achieve sparse recovery fails; however, one variant provides promising theoretical guarantees under certain assumptions on the feature dictionary while another variant empirically outperforms prior methods both in approximation accuracy and efficiency on several benchmark problems.