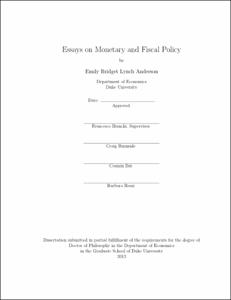 This dissertation consists of two chapters studying monetary and fiscal policy. In the first chapter, I study the welfare benefits and costs of increased central bank transparency in a dynamic model of costly information acquisition where agents can either choose to gather new costly information or remember information from the past for free. Information is costly to acquire due to an agent's limited attention. Agents face an intratemporal decision on how to allocate attention across public and private signals within the period and an intertemporal decision on how to allocate attention over time. The model embeds a coordination externality into the dynamic framework which motivates agents to be overly attentive to public information and creates the possibility of costly transparency. Interestingly, allowing for intratemporal and intertempral tradeoffs for attention amplifies (attenuates) the benefits (costs) of earlier transparency whereas it attenuates (amplifies) the benefits (costs) of delayed transparency.

The second chapter, co-authored with Barbara Rossi and Atsushi Inoue, studies the empirical effects of unexpected changes in government spending and tax policy on heterogeneous agents. We use data from the Consumption Expenditure Survey (CEX) to estimate individual-level impulse responses as well as multipliers for government spending and tax policy shocks. The main empirical finding of this paper is that unexpected fiscal shocks have substantially different effects on consumers depending on their age, income levels, and education. In particular, the wealthiest individuals tend to behave according to the predictions of standard RBC models, whereas the poorest individuals tend to behave according to standard IS-LM (non-Ricardian) models, due to credit constraints. Furthermore, government spending policy shocks tend to decrease consumption inequality, whereas tax policy shocks most negatively affect the lives of the poor, more so than the rich, thus increasing consumption inequality.