Sentimental Manipulations: Duty and Desire in the Novels of Sophie Cottin 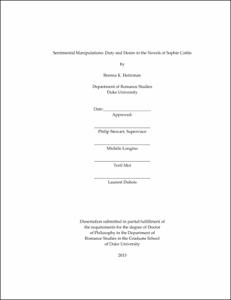 "Sentimental Manipulations: Duty and Desire in the Novels of Sophie Cottin" examines four novels by Sophie Cottin, from 1798 until 1806. A forgotten but once-popular novelist, Cottin used the theme of motherhood to develop the relationship between women and desire and duty. These novels use the sentimental novel in different ways that challenge the limits of genre and confront social perceptions of motherhood. The generic transitions reveal subversive representations of women's sexuality and choice. The author's rewriting of motherhood and genre thus plays a crucial role in understanding the complex and developing notion of the sentimental novel in a period of transition after the Revolution. The eighteenth century gave rise to more structured gender divisions in society that provided little space for women's freedom outside of the patriarchal dictates of the family and motherhood. Jean-Jacques Rousseau's 1761 publication of <italic> Julie; ou la Nouvelle Héloïse</italic> and his 1762 publication of <italic> Emile; ou de l'éducation</italic> are thought to have defined social roles for women in relation to their reproductive abilities. The novel, as a site of social production, was understood to have influential moral implications and was used to confront and maintain socially accepted behavior. Mother-child depictions in literature, therefore, reveal socially acceptable behavior for women. My first chapter examines the development of motherhood as a form of social duty imposed on women. I explore the Rousseauian themes in Cottin's first sentimental epistolary novel, <italic> Claire d'Albe</italic>, published in 1978. The representation of adultery reveals the complex relationship between women's duty, virtue, and sexuality. In my second chapter, I analyze how Cottin manipulates the epistolary sentimental genre in <italic> Amélie Mansfield</italic>, published in 1802. Cottin creates narrative spaces that privilege women's expression and redefine women's choice through a violent and controversial depiction of the protagonist's suicide. I explore the social implications of the removal of the suicide scene from all publications of the novel after 1805. My third chapter examines the incorporation of elements of the travel narrative into the sentimental genre in <italic> Malvina </italic>, published in 1800, and <italic>Elisabeth; ou les exilés de Sibérie</italic>, published in 1805. Through the description of travel, I explore Cottin's representations of duty and women's education at two distinct moments in her publishing career.