Beyond Public and Private: A Theological Transfiguration 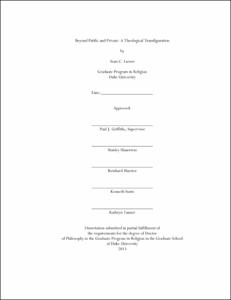 In this dissertation, I argue that the conceptual grammar of Augustine's thought provides a way of re-thinking the public/private distinction as it has been developed in modernity. The dissertation consists of two parts. The first part is a conceptual analysis and a genealogy of the distinction through focus on specific private characters produced in both antiquity and modernity. I focus on the characters of the "woman" and the "refugee." Conceptually, I argue that the public/private distinction can be seen both as an anthropological distinction and as a socio-political distinction: claims about the structure, nature, and history of selves have implications for how society ought to be organized, and claims about how society ought to be organized have implications about the structure, nature, and history of selves. I show how Christianity changed society by creating new character scripts and with them, new socio-political possibilities. The second part of the dissertation provides one Augustinian conceptual "grammar" that makes sense of the revolution Christianity effected possible, and it responds to problems raised by the genealogy in the first half by providing a close reading of Augustine's texts relating to God and creation, interiority, salvation and beatitude, and the Virgin Mary. I display the logic in Augustine's thought by which, in God, domestic and public come together, how God's relation to creation changes how to think about interiority, what that means for how Augustine understands salvation as a restoration of proper inwardness, and how the character of the Virgin Mary condenses the grammar as a sacrament of human salvation. I draw out the ways that Mary shows how Augustinian thought provides resources to think "beyond" the public/private distinction both as it was given to her in antiquity and how it has been received in modernity.