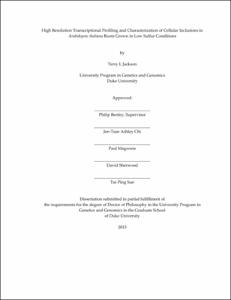 Environmental stress affects plant development and productivity. Sulfur deficiency is a key nutrient deficiency that adversely affects crop yield. The model plant Arabidopsis thaliana has played an informative role in deciphering the mechanisms involved in sulfur assimilation, as well as, the response to limited conditions. Using Arabidopsis thaliana as a model to investigate gene expression in the root, microarray data sets have been generated. These data sets consist of whole root sections for 6 time points across 72 hours, and enriched populations of 5 radial cell-types and 4 sections of 3 developmental zones of the root at 3 hrs on sulfur limited conditions. With these data it was determined which cellular tissues and developmental zones were affected most by sulfur limited conditions. Furthermore, a novel phenotype was characterized that occurs in roots after growth on low sulfur conditions. Cellular inclusions build up within the cytoplasm of mature cortical root cells. These inclusions have been termed "sulfur pox" and their composition remains to be determined.