Jose Rizal and the Spanish Novel 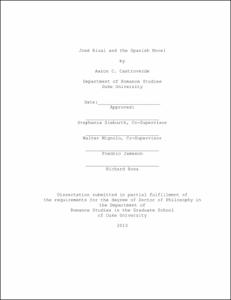 This dissertation is a preliminary attempt to define and theorize Spanish literature of the late nineteenth century from the perspective of the colonized. I take as my starting point the novels of the Filipino writer José Rizal: Noli me tángere and El filibusterismo. Although these novels are considered to be the foundational texts of the Philippine nation, I will instead focus on their relationship to Spain and the literature produced there around the same period. This analysis will be contrasted with a reading of Benito Pérez Galdós's novel Doña Perfecta, which, as many critics have claimed, bears a resemblance to Rizal's first novel. I will show how Galdós's novel demonstrates a colonizing mentality despite being nominally about an internal Spanish conflict. In conclusion, I will argue for the necessity of an understanding of Rizal's novels in order to better grasp the total context in which peninsular Spanish novels were produced.