'Any Name That Has Power': The Black Panthers of Israel, the United Kingdom, and the United States, 1948-1977 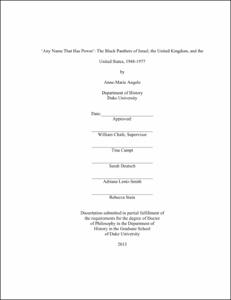 The US Black Panther Party for Self-Defense was an organization of the Black Power Movement, a cultural and a political nationalist movement central to the history of the African-American Freedom Struggle. The Black Panthers' anti-imperialist politics, militant visual style, grassroots strategies, and community programs appealed within and beyond the United States. Between 1967 and 1972, people of color struggling under class and ethnic oppression in six countries outside the United States formed Black Panther Parties inspired by the US Panthers. In the United Kingdom, West Indians, West Africans, and South Asians formed a Black Panther Movement in 1968 and in Israel, a group of Mizrahi (Arab) Jews founded a Black Panther Party in in Jerusalem in 1971. This dissertation examines these two movements with reference to the US Black Panthers in order to place local, national, and global histories in dialogue.

This study adopts a transnational framework that conceives of Black Power as a movement of global migrants. From 1948 to 1967, over two million people from Asia, Africa, and the Caribbean migrated to the UK and Israel. These migrants' overlapping experiences of displacement and class- and ethnic-based oppression led them to establish Black Panther groups in their new home countries in order to raise their political concerns under a collective banner. These people chose to become Black Panthers specifically because the US Black Panther Party offered a name and style that connected their global brothers and sisters to a range of grassroots strategies promoting interethnic solidarity and the collective advancement of black communities against the social structures that fostered racism. Through the examination of oral histories, photographs, letters, fliers, passport stamps, films, court cases, and surveillance files, this study focuses on how these global Panther activists represented themselves and their politics in the public sphere.

Both the British and Israeli Panther movements first organized in response to the city police's harassment of youth in their neighborhoods. Their respective critiques expanded from an opposition to police brutality to systemic goals of improving housing, education, welfare, and employment for blacks. Both of the nation-states in which these groups emerged relied upon the US for military stability and economic support during this period, such that the British and Israeli Panthers saw confrontations with their respective governments as acts of resistance to American Empire.

This dissertation, then, is at once a community study of two branches of a transnational social movement as well as a larger story. The broader narrative reveals how everyday people responded to the American Empire in the 1960s and 1970s, how the US Black Panthers translated black internationalist politics into urban neighborhoods, and how people outside the US constructed narratives about African-Americans as a way of making sense of racial formations at home. This work also demonstrates how foreign governments and media producers appropriated African-American history for a variety of in political purposes during this period. This examination enables a deeper understanding of the transnational black freedom struggle, as it centers the role that people of color outside the United States played in creating and sustaining Black Panther Movements that confronted American and British Empires from the grassroots.