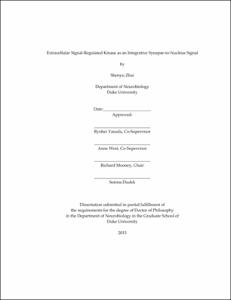 The late phase of long-term synaptic potentiation (LTP) at glutamatergic synapses, which is thought to underlie the long lasting memory (at least hours), requires gene transcription in the nucleus. However, it remains elusive how signaling initiated at synapses during induction of LTP is transmitted into the nucleus to commence transcription. Using a combination of two-photon glutamate uncaging and a genetically encoded FRET sensor, I found that induction of synapse-specific LTP at only a few (3-7) dendritic spines leads to pronounced activation of extracellular signal-regulated kinase (ERK) in the nucleus and downstream phosphorylation of transcription factors, cAMP-response element-binding protein (CREB) and E26-like protein-1 (Elk-1). The underlying molecular mechanism of this nuclear ERK activation was investigated: it seems to involve activation of NMDA receptors, metabotrophic glutamate receptors, and the classical Ras pathway. I also found that the spatial pattern of synaptic stimulation matters: spatially dispersed stimulation over multiple dendritic branches activated nuclear ERK much more efficiently than clustered stimulation within a single dendritic branch. In sum, these results suggest that biochemical signals could be transmitted from individual spines to the nucleus following LTP induction and that such synapse-to-nucleus signaling requires integration across multiple dendritic branches.