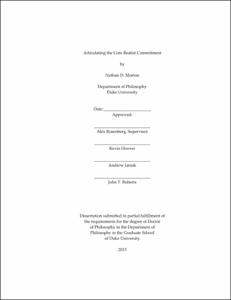 This thesis comprises an investigation into a very well known and perennial philosophical debate over the interpretive status of our most well confirmed scientific theories, known as "scientific realism." I do not defend scientific realism; rather, I set out to determine what scientific realism is in the first place. My contention is that the thesis is not a single, unified view, but rather a conglomeration of loosely associated propositions that are highly conceptually interwoven, but rarely distinguished. These consist of several different metaphysical, epistemological, and semantic doctrines, which I examine in great detail. I then argue that the indeterminate nature of scientific realism muddles the issue (if there is any) and renders debates fruitless. I attempt to define a thesis with relatively more precise content, which I call the "Core Realist Commitment," CRC. I argue that the CRC prioritizes epistemology - with the thesis that we can and do have (some) theoretical knowledge. I then demonstrate the relatively minimal commitments of the CRC, namely, a minimalist and very undemanding metaphysics, and almost none of the semantic theses that have been traditionally associated with realism. I conclude that the CRC is a step forward in thinking about the debate, not just for its relative precision but also because it is consistent with, and even tolerant of, a wide array of disagreement over concerns that are, I argue, external to the debate and need to be decided on independent grounds.