Aging in South Asia: Attitudes/Beliefs of Elders in Southern India and Long-Term Care of the Elderly in Southern Sri Lanka 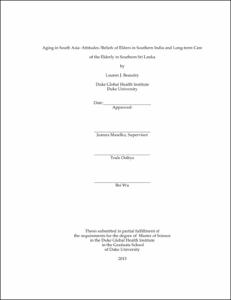 Developing nations in Asia are posed to experience a significant increase in the population of older adults living in their respective societies. Over the coming decades, India, the second most populous country in the entire world, is poised to experience a significant increase in its elder population. India's population of adults 60 years of age or older is projected to increase from 8% to 19% of the countries total population by the year 2050. Figures predict that by mid-century, 323 million people in India will be aged 60 years or older, more than the total current U.S. population. As the demographic structure of India is making a dramatic shift, concerns regarding the health and wellbeing of the growing Indian elder population are emerging, as is the growing concern for social policy. In addition, Sri Lanka is the fastest aging nation in South Asia. Multiple factors, including an increase in the number of people considered to be the "oldest old" (80+ years of age), a decrease in the number of working age adults, and increases in disability amongst the elderly, could necessitate an increased need for institutionalization of elderly Sri Lankans into long-term care facilities.

This project aims to study aging in south Asia from two different perspectives. An analysis of existing data from Southern India was done to examine the attitudes and beliefs of Indian elders towards aging and support systems for the elderly. Mental health of Indian elders was assessed and logistic regression analysis was conducted to examine possible correlations between attitudes and beliefs of the elderly and elder mental health. In addition, a qualitative descriptive study of Sri Lankan elder homes was carried out in the southern district of Galle, Sri Lanka. A convenience sampling method was used to identify six elder homes located in the area, and visits were made to each of the homes. During the visits, elder home mangers were interviewed in order to gain general information on the functioning and history of the elder homes, as well as general information on the residents living at the facilities.

Results from the Kerala Aging Survey revealed that psychological distress was present for over one third of elders in Kerala. Rates of psychological distress were higher for women, the poor, and those with advanced age. Elder women appear to be especially vulnerable to psychological distress in old age. Elders believe that children are responsible for supporting parents in their old age; lack of satisfaction with support received from children was associated with the presence of psychological distress amongst elders. For the qualitative study on Sri Lankan elders homes, it was found that both familial and community support are significant factors in the long-term care of elderly Sri Lankans. Though many elder home residents had been diagnosed with a chronic NCD or disability, lack of familial support was consistently identified as the driving force necessitating the elderly to reside at the long-term care facilities. With little or no financial assistance from the government, the facilities themselves all relied heavily on donations from the community to function on a daily basis.