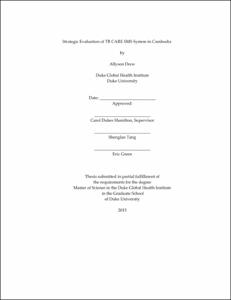 This retrospective study examined the impact of a USAID-funded and FHI 360-implemented pilot project entitled "TB CARE SMS System" in Cambodia. The primary objective of this study was to compare the "sputum submission to treatment delay" (SSTD) before and after the TB Care SMS System was initiated in December 2011 in the health clinics in Cambodia that correspond to the Kampong Cham Referral Hospital (RH) and Chamkar Leu Referral Hospital. The secondary objective was to capture the impact and limitations of the pilot TB CARE SMS System from the perspective of the healthcare workers and Community Directly Observed Therapy (CDOT) Program workers who use it on a daily basis.

A time-series regression analysis was used to measure the effect of the pilot project on SSTD. Measuring the secondary objective was conducted with in-person interviews with health center and CDOT workers who have used the SMS system, at 5 health centers (HCs) that use either the Chamkar Leu RH or Kampong Cham RH lab.

With a total of 85 patients used in primary analysis, it appears that the pilot TB Care SMS System did not have the expected impact on the period that the sputum was sent to the lab for testing until the time the patient started treatment (SSTD).. However, measuring the date from when the sputum labs were sent to when the lab results were received by the HCs, we did not find a statistically significant reduction in delay either, though the trend was in the expected direction, with an apparent reduction of 1.70 days. In the secondary objective, all of both HC staff and CDOT workers believed the new SMS system was better than the original paper-based system.

The results show that the TB CARE SMS System demonstrated no statistically significant impact on SSTD, in the limited 6 month timeframe. However, it is an overall success from the perception of the users.