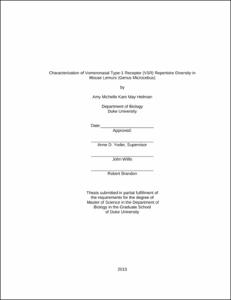 An organism's ability to detect and interpret chemical signals from the surrounding environment is vital to its survival. In mammals, the vomeronasal organ provides an integral part of this requirement as it allows for the detection of inter-individual chemical signals. Located within the vomeronasal epithelium is a group of highly specialized receptors called vomeronasal type-1 receptors (V1Rs). These receptors bind pheromones and kairomones, which are chemical cues from conspecifics and heterospecifics, respectively. Recently, V1Rs have been recognized as highly variable across mammalian taxa. One extraordinary example is the mouse lemur, in which ~83% of the estimated 259 genes are expected to be intact. This relatively young and cryptically diverse prosimian group has a controversial history of species delimitation and it is possible that patterns in the rapidly evolving and highly diverse V1R gene family may provide insight into species boundaries. This study generated broad and deep coverage of the two most diverse V1R subfamilies across multiple <italic>Microcebus</italic> species. By utilizing Pacific Bioscience's single molecule real time sequencing technology, this study produced sequences at a fraction of the time and cost of the traditional method of Sanger-sequenced clones. The results advance our understanding of the high diversity-at least 5.6% and 9.9% sequence divergence intra- and inter-individually for V1R<italic>IX</italic> and V1R<italic>strep</italic>, respectively-and rapid evolution of V1Rs in mouse lemurs. Comparing these results with draft genome mined sequences demonstrates the limited utility of low coverage genomes for identifying variation in this gene family. The patterns uncovered here provide no clear evidence for the role of these two characterized subfamilies in maintaining or generating species boundaries, but may instead point to an alternative mechanism of species recognition that is more complex and intricate than previously envisioned.