The Effect of Warming on Phenology, Physiology, and Leaf Nitrogen in Six Deciduous Tree Species Over the Growing Season 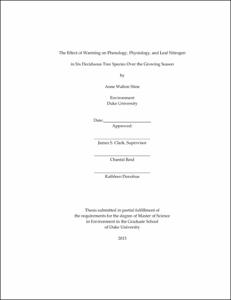 There is no consensus on climatic warming's effect on phenology, photosynthesis, and leaf nitrogen content in temperate deciduous tree species. A major question is whether or how these trees will utilize a longer growing season. Data on leaf photosynthetic rates, leaf nitrogen content, and leaf phenological status were collected weekly or biweekly in 2012 for Acer rubrum, Liquidambar styraciflua, Liriodendron tulipifera, Quercus alba, Quercus rubra, and Fraxinus americana at Duke Forest in Orange County, North Carolina. Seedlings were grown in open-topped chambers established in 2009 that were maintained at either ambient or 5 degrees Celsius above ambient temperatures. Half the chambers were shaded, half were under gap conditions.

There were major differences between years in terms of the effect of warming on nitrogen content and resorption. In 2011, percent leaf nitrogen was lower in warmed chambers, and nitrogen resorption efficiency was not correlated with warming treatment. In 2012, warmed chambers had higher nitrogen concentration and a wider range of nitrogen resorption values than ambient, and resorption efficiency was positively correlated with warming in 2012. It is possible that these differences between years are driven by differences in availability of soil moisture. 2011 was much drier during the senescent period than 2012. The direction and magnitude of warming on nitrogen was consistent within years, but varied by year.

Warming often causes visible change in the timing of phenology, but the timing of photosynthetic decline was unaffected and changes in nitrogen content and resorption were interannually variable. The benefits of delaying visible senescence are unclear. The effect of interactions between warming and soil moisture on leaf processes must be explored further. It is possible that the delay in visible phenology without a concurrent delay in leaf decline is due to a mismatch in environmental cues under a warmer climate. Because of the lack of obvious benefit to plant carbon uptake with warming, it is possible that there is no true extension of the growing season in fall.