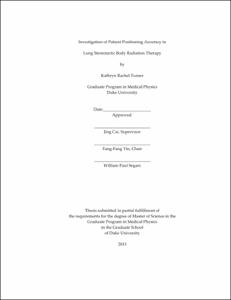 Purpose: It has been shown that patients' irregular breathing can cause variation in the delineation of the internal target volume (ITV) and affect the accuracy of four dimensional computed tomography (4DCT) and cone-beam computed tomography (CBCT) images. Therefore, it is expected that the variations induced by irregular breathing will also affect image registration between the two images. This study aims to test a new method of ITV delineation, which involves using the gross tumor volume (GTV) in conjunction with the maximum intensity projection (MIP) generated from the 4DCT, rather than just the MIP itself. Additionally, this study aims to quantitatively assess breathing irregularity induced error in CBCT-based patient positioning in lung SBRT and correlate the error with a measure of breathing variability.

Methods and Materials: For testing the new method of ITV delineation, the Computerized Imaging Reference Systems (CIRS) Dynamic Thorax Phantom Model 008A (CIRS, Norfolk, VA) with CIRS motion control software was used to model 4 irregular patient respiratory profiles and one regular respiratory profile (sine wave) with a 3 cm tumor insert. A 3D-CT and repeated 4D-CT scans were performed on a 4-slice clinical scanner (Lightspeed, GE, WI). The RPM system (Varian, Palo Alto, CA) was used to track the respiratory profiles. GTV was contoured on 3D-CT, and ITV was contoured on each MIP (ITVMIP) using a consistent lung window by the same person. The new method of creating ITV was to combine the GTV and ITVMIP, namely ITVCOMB. To evaluate which ITV is more accurate, ITVCOMB and ITVMIP were compared to a "ground truth" ITV (ITVGT) which was generated by combining the three ITVMIPs. To investigate the error in image registration between the CBCT and 4DCT, the 4D extended cardiac-torso (XCAT) digital phantom was used to generate 10-phase 4DCTand CBCT images using in-house developed simulation programs. Images were generated using the same clinical-based parameters for various respiratory profiles (one regular sinusoidal and 10 irregular) and tumor sizes (1 cm, 2 cm, 3 cm). Maximum intensity projection (MIP) and average intensity projection (AIP) images were generated from 4DCT images The internal target volumes (ITVs) were contoured by the same user with the same window/level in Eclipse. Image registrations were performed between CBCT and AIP images by matching the target as in the clinic, for each respiratory profile and tumor size. Error of registration was determined as the difference between the manual CBCT-to-AIP registration and the known registration between the two. Variability of the respiratory profiles was measured, and a correlation between the error and breathing irregularity was investigated. Additionally, variation in ITV volumes among AIP, MIP, and CBCT images were examined.

Conclusions: The results suggest that combining GTV of the 3D-CT with the ITV of the MIP is more accurate than the ITV of the MIP alone, and thus would be a simple method to reduce breathing irregularity induced errors in ITV delineation for treatment planning of lung cancer. Errors could occur during CBCT-to-AIP registration in lung SBRT when patient's breathing is irregular, especially in the SI direction. The error is largely induced by breathing irregularity and could not be overcome by perfecting manual matching, and it should be considered when determining the ITV to PTV margin. Differences in ITV volumes for AIP-MIP were seen to be minimal. However, significant differences in ITV volumes for MIP-CBCT were observed. Further studies of clinically minimizing such uncertainties are desirable.