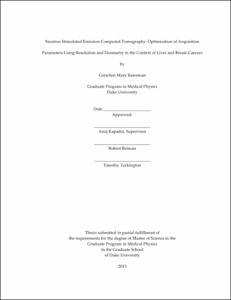 Proposed is a method for investigating optimal acquisition parameters in NSECT, neutron stimulated emission computed tomography, for good image quality and low dose for diagnosing liver and breast cancers. These parameters include the number of angles, number of translations per angle, beam width, and beam width spacing. These parameters will affect dose, which will increase with increasing total neutron flux. Therefore, a balance must be achieved for the parameters mentioned above, to yield a desired dose limit and tolerable spatial resolution necessary for liver and breast cancer diagnosis.

Using Monte Carlo simulation toolkit GEANT4, the effects of beam spread due to neutron elastic scatter was explored. Then, a geometrical water torso phantom with slanted edge solid iron phantom was run for different acquisition parameters, and an MTF was taken to determine resolution for each set. For dose considerations, two anthropomorphic voxelized phantoms, one with liver cancer lesions, and one with breast cancer lesions, were scanned with the same parameter sets, and organ doses and DVHs, dose volume histograms, was computed for each set. In addition, images of the phantom in the lesion plane were reconstructed for those parameter sets showing best resolution and lowest dose.

It is found that beam spread due to elastic scatter off of Hydrogen atoms is negligible for all beam widths. For optimal resolution in the primary breast phantom, it was found that acquisition parameters of a 5 mm beam, with no gaps, with any of the five angles provided the superior resolution. For the optimal resolution in the liver, it was found that down sampling angles and introducing gaps between projections greatly affected image accuracy and resolution. Also, the 5 mm beam width provided better geometrical accuracy, but the 1 cm bream width provided slightly better resolution.

Organ doses are computed for the primary organ and organs at risk for each parameter set at 500 K neutrons per projection. For a scan of the full volume of the liver, liver organ doses ranged from 25.83 to 0.19 mSv. For the same scan, the organ doses for the heart ranged from 0.18 to 0.05 mSv. For a scan with the same pool of acquisition parameters of the full volume of the breast, breast organ doses ranged from 49.87 to 0.38 mSv. Furthermore, the DVHs for both scans showed a very steep drop-off at low dose bins for secondary organs at risk and a reasonable drop-off for the primary organ.

Finally, reconstructed images of the anthropomorphic scans using the super sampled geometry in the liver scan showed one lesion, using images of iron and phosphorous. With more degraded image quality, reconstructed images of the breasts using the super sampled geometry showed only the three cm lesion accurately. The images reconstructed from the optimal set identified for liver scans also showed the larger lesion, except with some noise from the presence of iron and phosphorous in other organs. The images reconstructed from the optimal set identified for the breast scans had a similar result to that of the super-sampled case, albeit with lower contrast. The least sampled case for both scans were found to be diagnostically useless. From these anthropomorphic images, this work demonstrates that in-vivo imaging of breast and liver cancers may be potentially possible with NSECT at a low dose.