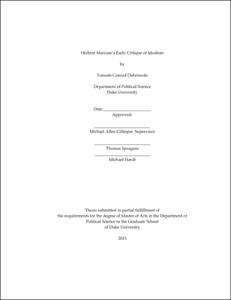 Herbert Marcuse's early essays and reviews written while under the tutelage of Martin Heidegger continue to suffer a poor reception. Even the most sympathetic of his critics widely focus on either his deviations from existing Marxist orthodoxy, or his failure to demonstrate the commensurability of Marxism and existentialism. Although both these concerns highlight important problems in Marcuse's work, this narrow focus of Marcuse scholarship neglects essential aspects of his early thought and tends to draw too hasty parallels between Marcuse and Heidegger. This thesis therefore attaches greater weight to Marcuse's own reception and understanding of a broader cross section of the concurrent intellectual milieu - particularly late nineteenth and early twentieth century debates as to whether idealist philosophy is portable to social science. I argue that by foregrounding Marcuse's early work against the backdrop of neo-idealism better illuminates Marcuse's concern with what types of truth claims inform political action, and how one might assess the validity of these claims.