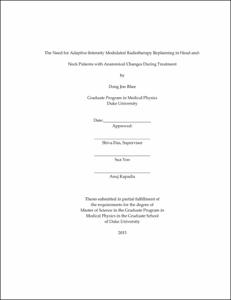 Purpose: The aim of this study is to quantify the effectiveness of adaptive radiation therapy (ART) when anatomical changes to the tumor and/or the organs are observed for head and neck patients during the course of intensity modulated radiation therapy (IMRT).

Conclusions: In cases where anatomical changes are observed during therapy, ART can be applied to significantly reduce median parotid glands dose and improve target coverage. However, these changes are small and may not be clinically significant, implying that adaptive radiotherapy may not provide benefit for head-and-neck cases, on average.