Media Manipulation of the Tragedy at Smole&#324;sk: Nasz Dziennik's and Gazeta Wyborcza's Coverage of the 2010 Crash 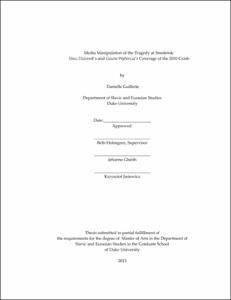 This project focuses on the debate over Poland's national significance and future political path argued in the Polish media in the wake of the 2010 Smole&#324;sk crash. It draws on the primary sources of <italic>Nasz Dziennik</italic> and <italic>Gazeta Wyborcza</italic> to represent the most diverse political viewpoints in Poland today. <italic>Nasz Dziennik</italic> voices the perspective of the conservative right addressed to a national audience and <italic>Gazeta Wyborcza</italic> presents a popular liberal view styling on such Western models as the <italic>New York Times</italic>. My methodological approach to this project was informed in some ways by the principles of discourse analysis as I analyzed coverage of the crash (news reports, editorials, interviews) in the period from April 10, 2010 through October 2011; I read approximately eight hundred articles from each publication in the original. My analysis of this debate is organized by what I found to be key themes: issues of authorship (featured authors, their orientation and style), the significance of the crash in Poland's national history and present relationship with Russia, and Poland's place in the European community.