The Proceduralist Case for Judicial Review 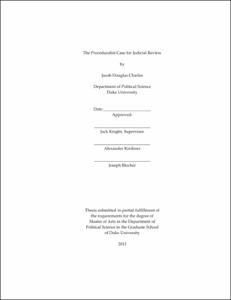 This essay explores majority decisions to give up majority power. In particular, it analyzes a majority's decision to institute judicial review as a method of final decision-making on questions of constitutional rights and contrasts that decision with the majority's election of a dictator. Both decisions involve a majority's voluntary transfer of power for certain matters in irreversible ways. Adopting the proceduralist viewpoint, the essay argues that these types of decisions--involving majoritarian renunciation of power--require a greater justification than decisions that do not alter future decision-procedures. That greater justification requires these types of decisions, decisions this essay terms "delegation decisions," to satisfy three legitimacy conditions. First, the majority can only legitimately give up power over issues that can be decided by procedures other than majority vote. Second, the procedural mechanism the majority gives power to must be a fair procedure. Finally, the procedural mechanism must also be appropriate for the decisions it is supposed to make.

The essay argues that majoritarian imposition of judicial review satisfies these three conditions. Majoritarian election of a dictator does not. First, the imposition of judicial review hands over only one set of issues to the constitutional court--bill of rights questions--that is capable of resolution by a nonmajoritarian procedure. Second, judicial review as practiced by an ideal constitutional court is a fair procedure for rights questions because it exemplifies qualities such as anonymity and neutrality that are central to procedural fairness. Finally, a constitutional court is appropriate for deciding constitutional rights questions because its virtues--particularly its transparency, deliberative capacity, principled reasoning, and impartiality--are relevant for these questions and mitigate distortions in the decision-making process concerning rights. On the other hand, an elected despot makes decisions on questions that the majority cannot legitimately relinquish power over, fails to instantiate values of procedural fairness, and is inappropriate for any number of the infinite questions that it has authority to decide. Proceduralists can thus resist the majority's election of a dictator without also having to resist its imposition of judicial review. And they need not abandon proceduralism in order to do so.