Supply, Demand, Connections, Legitimacy: Understanding the Waxing and Waning of the Protection Industry in Russia 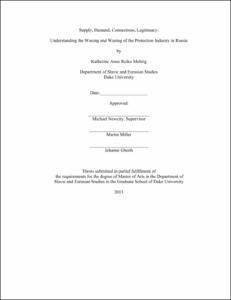 The literature on organized crime, while increasingly rich, has yet to create a paradigm to predict and explain the waxing and waning of the private protection industry. In the work that follows, I create a general model and identify factors that help predict and explain fluctuations of protection services within organized crime groups. I derive the four points below from analysis of the Russian case, emphasizing the years after the fall of communism and around and after the rise of Putin. I argue that if the following premises are true in a given country, they predict growth, or at least the existence, of illicit private protection:

1. Within a given state, there is demand for private protection (resulting from neglect or inability of the state to provide protection)

3. Within the given state, there is continuity of regime or of people in power (which allows the racket to continue operating smoothly)