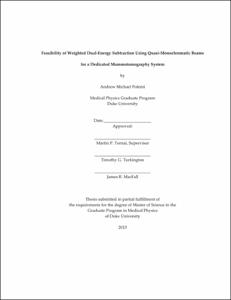 The goal of this research was to investigate the feasibility of using a weighted dual-energy subtraction method in dedicated breast CT using quasi-monochromatic x-ray beams, to better distinguish soft tissues in the breast. This research used computer simulations and measurements, includes development of protocols and phantoms, and yields quantitative results and physical components. Quasi-monochromatic beams were created using different specially processed, hermetically sealed ultra-thick K-edge filters yielding a maximum mean energy difference of 7 keV; also, different kVp potentials on the x-ray tube were used with higher atomic number filters, yielding a maximum mean energy difference of 11 keV. A cylindrical phantom containing muscle tissue equivalent material, glandular tissue equivalent material, polyethylene, and acrylic was filled with methanol (adipose tissue equivalent) was developed and scanned to investigate dual-energy contrast enhancement of the different materials. The CT scans were acquired using a dual-modality SPECT-CT system for dedicated breast imaging. The weighted dual-energy subtraction method is adapted from dual-energy x-ray absorptiometry, where a high and low energy CT scan is acquired using two different ultra-thick k-edge filters (or tube potentials) and the data is reconstructed. Region of interest values are obtained from each image, which is then multiplied by a weighted value (k), and the higher energy image is subtracted from the lower energy image to achieve contrast enhancement. The k-values were calculated from the ratio of measured attenuation coefficients for the material to be subtracted. In a projection-noise normalized acquisition scenario, it was found that weighted dual-energy subtraction with quasi-monochromatic beams might not be feasible under the current circumstances due to the especially high noise (poor contrast to noise ratios) and poor contrast. While this was not an optimized scenario, the approach does have promise, indicating that more investigation is needed.