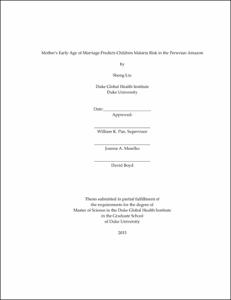 The objective of this study is to determine the malaria risk among children and adolescents from early married families in the Peruvian Amazon. We will explore the hypotheses that younger maternal age of marriage, younger maternal age at child birth and family member's involvement in labor migration are associated with increased malaria risk among their children under 18 years old.

This research used data from a longitudinal study of human migration and family health implemented between February 2009 and August 2013 in 18 road and riverine communities of the Peruvian Amazon in the region of Loreto. 852 mother-child dyads were recruited, with five follow-up visits for the road communities and two follow-ups for the river communities. The primary outcome was number of child malaria episodes and the key independent variables were maternal age of marriage, maternal age at child birth and family member's labor activities. We used a multilevel Poisson model to examine relationships among these key variables, with standard errors to account for clustering of mothers in the households in communities.