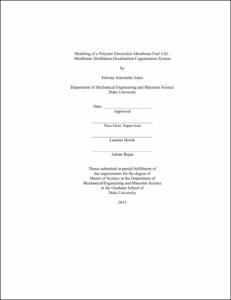 The demand for water and energy increases as the world's population grows. Unfortunately, many people have limited access to these two very necessary resources. In order to solve this dire issue, industry leaders, governments, scientists, and researchers have been developing and improving various technologies that show promise for being able to sustain the demand for energy and water of a growing population. One method that has proven effective in supplying water to regions that lack potable water is desalination. However, this process requires a great amount of energy to produce enough clean drinking water for a given population. The research described in this work focuses on improving the energy efficiency and productivity of desalination through cogeneration, e.g. combined heat and power (CHP). The cogeneration system consists of a polymer electrolyte membrane (PEM) fuel cell coupled with a direct contact membrane distillation (DCMD) desalination system in a bottoming cycle. For this study, the cogeneration system was modeled mathematically and computationally using the quasi-2-D PEM fuel cell model described in Hotz et al., 2006, Int. J. Heat Mass Transfer [1]. The computational model will be used to create a physical prototype for testing. The computational model has shown that using a PEM fuel cell is an effective system for cogeneration with a DCMD desalination unit. However, the low operating temperatures of the device limit the overall performance and efficiency of the cogeneration system.