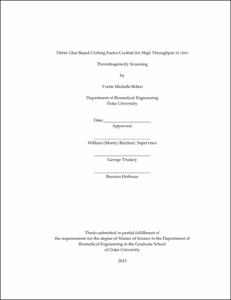 About one in four deaths in the United States are currently due to some form of heart disease [1]. Patients with cardiovascular disease usually require some form of perfusion-based surgical intervention at some point in their lives. To this end, biomaterials used in these applications elicit thrombus formation at some point after implantation. To date, accurately predicting the thrombogenecity of biomaterials remains difficult, and current testing methods are not comprehensive [2]. This is due to the fact that although blood clotting has been a topic of research for many decades, the interplay between the myriad of biochemical and physical reactions that occur in this process is not yet fully understood. One problem is the unpredictability of working with whole blood, as its precise contents vary from person to person, and its activity varies with handling methods [2]. Therefore, it would be interesting to use a bottom-up approach and build an in vitro assay with minimal and specific clotting components to determine differences in thrombogenicity between different blood-contacting surfaces that may be used on an implantable biomaterial.

By combining clotting factors Va, Xa, II, and fibrinogen and focusing on anti-thrombotic modulators antithrombin III and heparin, samples were tested to show a dose response in clotting times and fibrin clot formation. This was done by measuring turbidity in a plate reader, and by manually assessing the time at which the first fibrin strand could be pulled up with a pipette tip. R squared values of greater than 0.96 for all correlation plots demonstrated a strong correlation between manual and plate reading times in all cases. Clotting factor cocktails with thrombin and prothrombinase complex factors showed comparable clotting times at 1U, 0.5U, 0.25U, and 0.125U/mL of equivalent thrombin activity in plasma. A significant dose response to heparin sodium salt with antithrombin III and 0.1U/mL prothrombinase complex was demonstrated at 0.3, 0.4, 0.5, 0.6, 0.7 and 0.8 ug/mL of heparin sodium salt. These results show that it will be possible to construct specific microplate-based thrombogenicity assays with purified components of clotting.