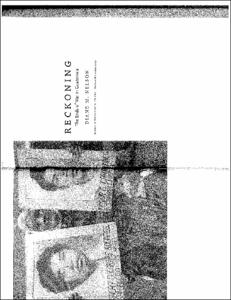 View / Download
1.8 Mb
Date
Author
Nelson, DM
Repository Usage Stats
384
views
249
downloads
Abstract
Following the 1996 treaty ending decades of civil war, how are Guatemalans reckoning with genocide, especially since almost everyone contributed in some way to the violence? Meaning "to count, figure up" and "to settle rewards and punishments," reckoning promises accounting and accountability. Yet as Diane M. Nelson shows, the means by which the war was waged, especially as they related to race and gender, unsettled the very premises of knowing and being. Symptomatic are the stories of duplicity pervasive in postwar Guatemala, as the left, the Mayan people, and the state were each said to have "two faces." Drawing on more than twenty years of research in Guatemala, Nelson explores how postwar struggles to reckon with traumatic experience illuminate the assumptions of identity more generally. Nelson brings together stories of human rights activism, Mayan identity struggles, coerced participation in massacres, and popular entertainment-including traditional dances, horror films, and carnivals-with analyses of mass-grave exhumations, official apologies, and reparations. She discusses the stereotype of the Two-Faced Indian as colonial discourse revivified by anti-guerrilla counterinsurgency and by the claims of duplicity leveled against the Nobel laureate Rigoberta Menchú, and she explores how duplicity may in turn function as a survival strategy for some. Nelson examines suspicions that state power is also two-faced, from the left's fears of a clandestine para-state behind the democratic façade, to the right's conviction that NGOs threaten Guatemalan sovereignty. Her comparison of antimalaria and antisubversive campaigns suggests biopolitical ways that the state is two-faced, simultaneously giving and taking life. Reckoning is a view from the ground up of how Guatemalans are finding creative ways forward, turning ledger books, technoscience, and even gory horror movies into tools for making sense of violence, loss, and the future.
Type
Book
Permalink
https://hdl.handle.net/10161/7368
Collections
More Info
Show full item record Professor of Cultural Anthropology
I began fieldwork in Guatemala in 1985 exploring the impact of civil war on highland indigenous communities with a focus on the more than 100,000 people made into refugees and 200,000 people murdered in what the United Nations has called genocidal violence. Since then my research has sought to understand the causes and effects of this violence, including the destruction and reconstruction of community life (Guatemala: Los Polos de Desarrollo: El Caso de la Desestructuracin de las Comunidades Ind
This author no longer has a Scholars@Duke profile, so the information shown here reflects their Duke status at the time this item was deposited.