Properties of Glycophorin A and its Deglycosylated Derivatives; Phospholipid Vesicle Formation and the Incorporation of Integral Membrane Proteins 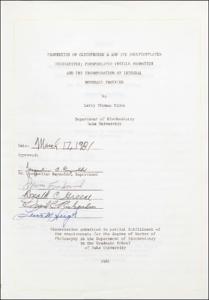 View / Download
44.8 Mb
Date
Author
Mimms, Larry Thomas
Repository Usage Stats
403
views
147
downloads
Abstract
The physical properties of native and deglycosylated glycophorin A and of membrane protein reconstituted vesicles were investigated. The goals of these studies were twofold. First, solutionscontaining glycophorin A were examined prior to and following removal of covalently attached carbohydrate from the protein to determine the contribution of carbohydrate to the glycoprotein amphiphilic properties. Second, the properties of glycophorin reconstituted vesicles were studied to address the question: Does the incorporation of a transmembrane protein into a membrane vesicle significantly increase bilayer premeability to ions? Glycophorin A, the major sialoglycoprotein of the human erythrocyte membrane, is approximately 31,000 daltons: 55% by weight is carbohydrate and 45% is protein. Neuraminidase was used to remove 99% of the sialic acid producing asialoglycoprotein and endo-a-N-acetylgalactosaminidase was used to remove 90% of the serine and threonine linked carbohydrate chains producing apoglycophorin A. Removal of carbohydrate results in increased binding of sodium dodecyl sulfate (SDS) to the polypeptide chain at saturating SDS concentrations. This increased binding indicates that sialic acid residues exhibit little or no SDS binding and actually inhibit SDS binding to the peptide chain. In detergent free solutions, native, asialo, and apoglycophorin are heterogeneously aggregated. SDS associates with aggregated glycophorin below its critical micelle concentration indicating the presence of noncooperative monomer binding sites; however, as with other membrane proteins, the association of SDS to glycophorin occurs principally as a cooperative transition above the critical micelle concentration. The additional binding of SDS to the deglycosylated forms does not produce significant changes in the peptide conformation as measured by circular dichroism. Removal of carbohydrate also produces corresponding changes in molecular weight, electrophoretic mobility on SDS gels, and distribution coefficients on gel chromatographic columns. At saturating levels of SDS binding, glycophorin and its deglycosylated derivatives were determined to be predominantly monomeric by sedimentation equilibrium. The relative mobility of the three forms on SDS gels increases with increasing carbohydrate removal. Relative mobility depends upon ionic strength, SDS concentration, and protein concentration. Native glycophorin and apoglycophorin in solution as a 1:1 molar mixture behave as noninteracting species by sedimentation equilibrium and gel filtration. Glycophorin incorporated vesicles were prepared by removal of detergent from solutions containing mixed micelles of egg phosphatidylcholine, octyl glucoside, and purified glycophorin. Glycophorin was not uniquely oriented in the membrane as shown by trypsin and neuraminidase treatment of vesicles. Vesicles that were formed in the presence or absence of glycophorin were similar in size and morphology (2300 ± 400 A in diameter) as imaged in the electron microscope. The permeability of these large unilamellar vesicles to Cl-, Na+, and Rb+ followed first order kinetics with rate constants of 2.1 x -5 -7 -7 10 , 2.6 x 10 , and 9.0 x 10 , respectively. The presence of glycophorin in the membrane at levels up to 220 copies per vesicle increased the permeability by less than a factor of five. This demonstrated that incorporation of membrane protein into vesicles does not necessarily lead to dramatic increases in membrane ion permeability, and therefore; this methodology may provide a useful control in the reconstitution of ion pumps into vesicles. To determine whether some biological activities can be maintained or restored under these conditions two integral membrane proteins, dopamine-8- hydroxylase and hepatic asialoglycoprotein receptor,were incorporated using similar procedures. These proteins were found to either retain or regain activity upon incorporation into vesicles. Both proteins are oriented in these vesicles such that all substrate binding sites are exposed on the vesicle exterior.
Type
Dissertation
Department
Biochemistry
Permalink
https://hdl.handle.net/10161/7388
Citation
Mimms, Larry Thomas (1981). Properties of Glycophorin A and its Deglycosylated Derivatives; Phospholipid Vesicle Formation and the Incorporation of Integral Membrane Proteins. Dissertation, Duke University. Retrieved from https://hdl.handle.net/10161/7388.
Collections
More Info
Show full item record