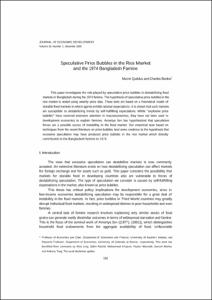 View / Download
86.1 Kb
Date
Authors
Quddus, M
Becker, CM
Repository Usage Stats
823
views
339
downloads
Abstract
This paper investigates the role played by speculative price bubbles in destabilizing food markets in Bangladesh during the 1974 famine. The hypothesis of speculative price bubbles in the rice market is tested using weekly price data. These tests are based on a theoretical model of storable food markets in which agents exhibit rational expectations. It is shown that such markets are susceptible to destabilizing trends by self-fulfilling expectations. While "explosive price bubbles" have received extensive attention in macroeconomics, they have not been used in development economics to explain famines. Amartya Sen has hypothesized that speculative forces are a possible source of instability in the food market. Our empirical tests based on techniques from the recent literature on price bubbles lend some credence to the hypothesis that excessive speculation may have produced price bubbles in the rice market which directly contributed to the Bangladesh famine in 1974.
Type
Journal article
Permalink
https://hdl.handle.net/10161/7462
Collections
More Info
Show full item record