Understanding the Politics of Latin America’s Plural Lefts (Chávez/Lula): Social Democracy, Populism, and Convergence on the Path to a Post-Neoliberal World 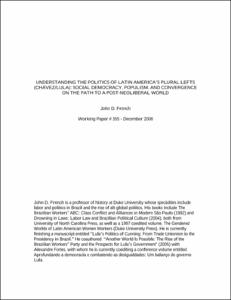 Professor of History
I am a professor of History and African and African-American Studies at Duke University in Durham North Carolina. With a B.A. from Amherst College, I received my doctorate at Yale in 1985 under Brazilian historian Em&iacute;lia Viotti da Costa. Since 1979, I have been studying class, race, and politics in Brazil, Latin America, and beyond with 42 refereed articles and three books: The Brazilian Workers ABC (1992/1995 in Brazil), Drowning in Laws: Labor Law and Brazilian Political