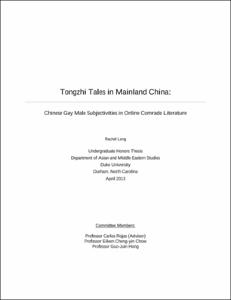 View / Download
2.7 Mb
Date
Author
Leng, Rachel
Repository Usage Stats
6,717
views
4,817
downloads
Abstract
This thesis considers Comrade Literature (同志文学tongzhi wenxue), a genre of contemporary Chinese homosexual (tongzhi) fiction, as it has emerged on the internet in Mainland China. Although Comrade Literature first emerged in Hong Kong and Taiwan in the 1980s, it was only after the mid-1990s with the advent of the internet that these gay-themed fiction were disseminated online in Mainland China. There are now hundreds and thousands of stories designated as “Comrade Novels” (同志小说 tongzhi xiaoshuo) archived on various Chinese websites. This thesis contends that online Comrade stories are not simply an expression of an underground Chinese gay culture; they are complex cultural texts with deeper meanings as a site of queer resistance facilitating the intersection of homosexual and heterosexual subjectivities. In addition to providing a catalyst for the local tongzhi subculture, Comrade fiction in Mainland China capitalizes on new media platforms to present same-sex desire to the broader public. A close analysis of four online Comrade stories focuses on the representation of male same-sex relations, turning a critical eye to the logics of these texts as tongzhi write out of a heteronormative milieu. The three chapters in this thesis will each examine distinct aspects of China’s Comrade Literature: 1) gender performance in same-sex romance narratives, 2) homosexual abjection in Comrade bildungsroman, and 3) the continuum of homosocial and homosexual intimacy in military Comrade fiction. Collectively, these four works span a stylistic and temporal timeline that reflect developments in the tongzhi subculture on the Mainland. These fiction renegotiate the boundary between heterosexual and homosexual behaviors, establishing a unique tongzhi identity that is at once assimilated into yet differentiated from mainstream Chinese heteronormative society to challenge hegemonic norms.
Type
Honors thesis
Department
Asian and Middle Eastern Studies
Permalink
https://hdl.handle.net/10161/7762
Citation
Leng, Rachel (2013). Tongzhi Tales in Mainland China: Chinese Gay Male Subjectivities in Online Comrade Literature. Honors thesis, Duke University. Retrieved from https://hdl.handle.net/10161/7762.
Collections
More Info
Show full item record